SPORT can be funny. Going into the 2018 European Championships, Marcus Lawler had ran the times leading up to the event to suggest he could leave a real mark on the Championships in Munich. This time around, his times this year suggest he’s not quite in the same form but could that lead to him surprising people? 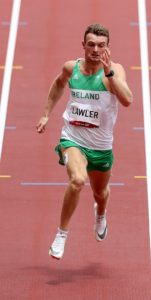 “In 2018, back then I was going in with a big PB and probably thought I could get close to a final. I got a very rude awakening, gone in the first round. This time I’m going in a little bit down the list of season’s best, but I’m quietly confident I can deliver a good performance. Hopefully a good performance in round one and then take it race by race,” said the 27-year-old, who will run in the 200m heats today at 11.30am.

Lawler, who competed at the last Olympics suggest that Covid arrived at a particularly bad time for the sprinter.

Preparations this season have been hampered by injury, which had led to Lawler running more often at 400m rather than his favourite 200m, even winning a silver in the National Championships at that distance.

However, he insisted that the shorter distance was always his focus.

Lawler has changed coaches from his mother Patricia to renowned sprint coach Shane McCormack but his mother will be there, as well as his girlfriend Muireann, to cheer him on as opposed to racing at the Tokyo Olympics in front of empty stands.