BALLYMURPHY Celtic and Naomh Eoin GAA player, Kyle Foley, is taking almost a year out from his sporting activities in Carlow to pursue his dream of being a professional soccer player in England. He has signed a contract with Boreham Wood which will bring him up to April 2023. 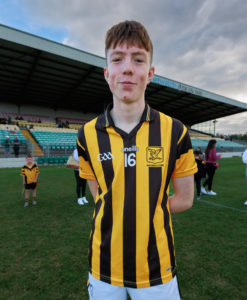 Some time ago, the 18 year old goalkeeper spotted an advertisement and as a result sent videos of himself performing in a number of match situations. The club got back in touch with him and he went for a series of trials. From there, he was offered this opportunity to play for  Boreham Wood.

The club is a professional football club based in Borehamwood, Hertfordshire in England. They are currently plying their trade in the fifth tier of English football and have made a good start to the season by taking four points from their first two games. They came to prominence last season with a run to the fifth round of the FA Cup before losing to Everton.

Kyle made a late appearance for Naomh Eoin recently as the club annexed the intermediate hurling title. He has always loved his GAA activities but this is an opportunity which couldn’t be missed.

“I will miss the hurling. Hurling has been number one for me,” he said.

Foley will be an additional Carlow interest in the division with Pádraig Amond playing for Woking.