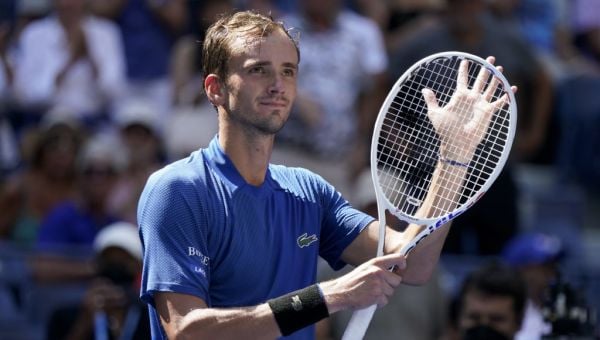 Defending champion Daniil Medvedev made a smooth start to his US Open campaign but “half dead” Stefanos Tsitsipas suffered a shock defeat by Daniel Elahi Galan.

It was not just the loss but the manner of it that was so surprising as Tsitsipas, one of five men who could have ended the tournament ranked world number one, lost the first 11 games.

From there he rallied and took the third set but Colombian Galan, ranked 94, was not to be denied the best win of his career, finally clinching his ninth match point for a 6-0 6-1 3-6 7-5 triumph.

Tsitsipas had treatment on his right arm but did not use that as an excuse, saying: “I was very motivated and pumped before the US Open started because I knew I can use this tournament to get closer to the number one spot.

“It would be very weird if it didn’t cross my mind because this is something I wanted since I was a kid and I know this is my chance now to step it up. It just didn’t go as planned.

“My arm was pretty tired, nothing was coming off of my strokes. He returned extremely well. He did a great job, he dominated the game completely. I just couldn’t get into the match at all. It was as if I was half dead.”

There were no such problems for Medvedev, who dropped just six games in a 6-2 6-4 6-0 victory over American Stefan Kozlov.

The Russian, who defeated Novak Djokovic 12 months ago to lift his first grand slam trophy, is hoping to draw on his positive memories, saying: “I definitely don’t want to forget about them. It’s a little bit (of) extra pressure but mostly I don’t feel it.

“I know that I want to play well and, if I don’t do it, I will not care that I won it last year, I will just be disappointed that this year didn’t work out my way.

“For sure it gives me a lot of confidence because I always played good here. I remember last year were some crazy matches. All of them were really high level from me. That’s what I want to continue doing this year.”

Nick Kyrgios is used to being the main event but he coped just fine with playing the understudy’s role this time as he followed Serena Williams onto Arthur Ashe and defeated doubles partner and good friend Thanasi Kokkinakis 6-3 6-4 7-6 (4).

“I thought I played a really good first couple of sets,” said the Australian. “When we both saw the draw, it was a nightmare. We never want to play each other.

“I can’t wait to get out with him on the right side of the net and play doubles in a couple of days. Hopefully never again but I’m really happy to move forward.”

Dominic Thiem was unable to defend the title he won in 2020 last year because of his long-term wrist injury and his return lasted only one match as he was beaten 7-5 6-1 5-7 6-3 by 12th seed Pablo Carreno Busta.

There was a landmark win, meanwhile, for former junior champion Wu Yibing, who became the first man from China to win a main-draw match at a grand slam in the open era.

Zhang Zhizhen had looked set to pip him to it only to miss out on seven match points in the third set and go on to lose in five to Tim Van Rijthoven.

Tenth seed Fritz was scathing about his performance, saying: “It sucks. It feels awful. I’ve been playing really well, had really high hopes. I feel like an idiot for thinking that I could win this thing, win the US Open. I can’t go out and play a match like that.”