Open-air Mass in Killabban bridged a gap of 370 years 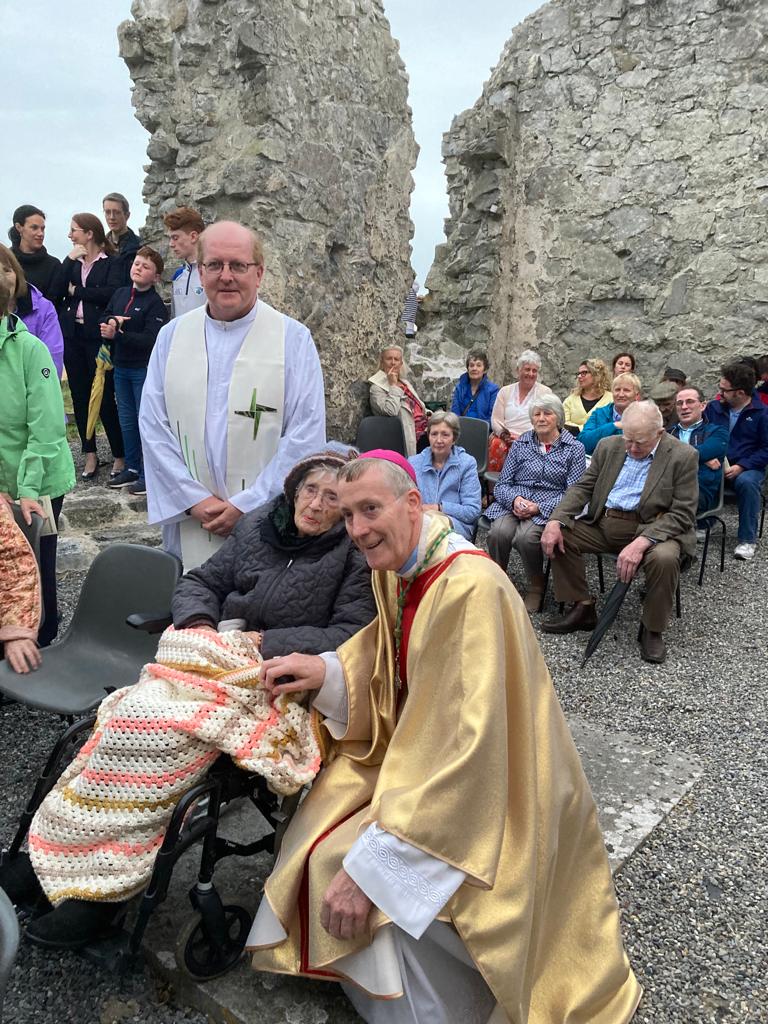 UPWARDS of 250 people attended last Thursday’s open-air Mass at Killabban Graveyard, a significant liturgical celebration which bridged some 370 years since Mass was last said at this holy place straddling the border of Laois, Carlow and Kildare.

The Mass, at which Bishop Denis Nulty of Kildare and Leighlin was chief celebrant, took place in St Abban’s Monastery, located within the Co Laois cemetery.

The Mass was of particular importance to one woman in attendance: Annie Julian, a highly respected member of the farming community from Graigue, Ballylinan, Co Laois is aged 99 and will become a centenarian on 17 December. When the Lord calls her, Annie will be laid to rest with her late husband in the ancient grounds of St Abban’s graveyard.

The nonagenarian was photographed with Bishop Nulty at the end of Mass.

Bishop Nulty was joined in celebrating Mass by Fr Padraig Shelley, PP, Arles, Fr John Trout, a missionary father, whose next priestly assignment is in Chicago, and Mgr Brendan Byrne. Seating was provided for the congregation.

Thankfully the weather was kind for the duration of the Mass, the early threat of a few raindrops sent some people to seek out umbrellas, but the rain never came.

The people were welcomed by John Moran, chairperson of the Killabban Monastery Restoration Committee, a dedicated group, which has undertaken a major, voluntary clean-up of the cemetery and monastery over the past decade. John extended thanks to Laois County Council and The Heritage for their help and support in bringing the project to fruition.

Special thanks was extended to members of the restoration committee for their vision, interest and their love for this sacred site.

Readers at Mass were Addie Wall and Mary Delaney, while the offertory procession members were Brendan Byrne, Michael Byrne, Larry Moran and Martin McDonald. Eucharistic ministers Richie Dunne and Sandra Byrne assisted with the distribution of Holy Communion. Music was by Margaret Brennan.

Bishop Nulty delivered a wonderful eulogy on the theme of the monastery.

A leaflet penned by Liam Delaney, the restoration committee secretary, was specially produced for the Mass, which informed that St Abban was a follower of St Fiacre, who had a monastery in Sleaty, between Graiguecullen and Knockbeg College. Killabban Monastery was established by St Abban about 640 AD. As the monastery and surrounding town grew in size, he travelled throughout Leinster setting up monasteries in his name.

He founded one such monastery in Adamstown, Co Wexford, which grew in equal size to Killabban. He also sent one of his monks, St Evin, to establish a monastery where Moore Abbey stands today in the town of Monasterevin. St Abban is said to have been descended from a noble race of Leinstermen. His father Cormasus was king of the Leinstermen, while his mother Mella was a sister of Bishop Ibar.

St Abban, who is reputed to have been buried at the site in Killabban, set up the early Christian settlement in the 7th century. The vast majority of Irish people spoke Gaelic during this time, while the monks would also have spoken Latin.

The ringfort is the most common settlement from this time and St Abban probably grew up on or near the ringfort at Killabban.

The existing monastery was constructed in the 12th century. The settlement fell into decline in the late 14th century due to the Bruce invasion in 1315 and the Black Death of 1348. However, the church at Killabban remained in use and was extended in the 15th century.

During Oliver Cromwell’s invasion, the church was attacked and ravaged, with many of the monks killed and the church fell into disuse.

The site became overgrown over the years and lay in ruins until 2012, when Killabban Monastery Restoration Committee was formed and thus began the painstaking job of preserving the ancient site for future generations and enhancing the rich heritage of the area.

A marquee was erected at the monastery and, following Mass, people were treated to refreshments, providing a social gathering of the Mass-goers from this rural area.

It was an evening of spiritual renewal at St Abban’s Monastery, with the celebration of Mass within the monastery walls now expected to become an annual part of the area’s liturgical agenda.