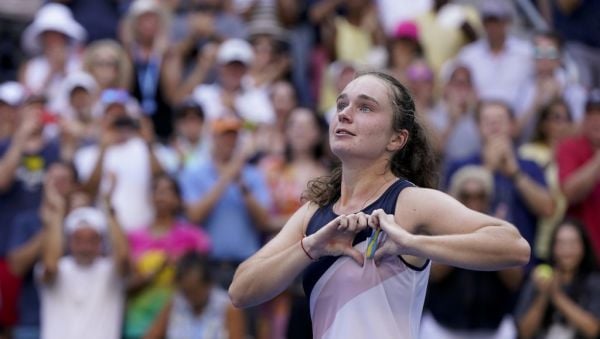 A young Ukrainian player whose training base was bombed caused the first big shock of the US Open by knocking out seventh seed Simona Halep.

Twenty-year-old Daria Snigur won the Wimbledon junior title three years go but this was by far the biggest result of her senior career.

The Kyiv native broke down in tears and made a heart shape with her hands around a ribbon on her chest in the colours of the Ukrainian flag after defeating Halep 6-2 0-6 6-4.

Take it in, Daria Snigur!

“It means Ukraine is always in my heart,” said Snigur. “This is a victory for Ukraine, for all Ukrainian people, for my family, for my team.”

Snigur’s father is with her in New York but her mother is at home in Kyiv, where the youngster is no longer able to train after the centre where she trained was bombed in the war.

“The situation is bad, of course,” she said. “I try to do the best for Ukraine, I try to support my country. It’s not so easy because the war is continuing. Sometimes it’s impossible to play but I try to do my best because I want to live in Ukraine.

“Before the war I practised in Kyiv but Russia bombed my base so before the US Open I practised in Riga with my coach but I don’t have a base where I can practise every time.

“I think (Ukrainian) people enjoyed my match because I have many messages. I didn’t understand what happened. I will try to understand it tomorrow because it was I think the best match in my career.”

Coco Gauff has enjoyed an excellent season and she eased into the second round with a 6-2 6-3 victory over Leolia Jeanjean.

Halep aside, it was generally a good day for the fancied names, with third seed Maria Sakkari gaining revenge for her Wimbledon defeat by Tatjana Maria with a 6-4 3-6 6-0 victory.