THE football championships provided some major talking points for a variety of reasons over the weekend.

Both the 2021 senior finalists lost their second round games while an eleven man Kilbride held on to edge old rivals, Kildavin-Clonegal, in the Intermediate Championship. 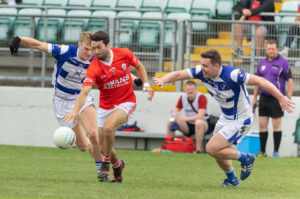 Pride of place surely went to Tinryland on Sunday where they bounced back from a six-point deficit and missed a penalty before a late, late Danny Moran point saw them beat Éire Óg by 0-12 to 1-8. There was also a club comeback for Paul Broderick and while his day started well with a first touch point, he had to retire injured later in the game.

On Friday,  under new manager Pado Flynn, Palatine laid down a marker when comfortably seeing off the challenge of Rathvilly by 4-11 to 1-7. Ciaran Moran scored two goals in a victory where the scoreline doesn’t tell any lies.

Flynn was delighted with the result.

“For the group here, there are an awful lot of young lads playing. It is their first year playing senior football. We set out our stall at the start of the year. The first part was to get to the league semi-final where we could have a shot at one of the big guns whether it was Rathvilly or Éire Óg. Rathvilly put us in our place that night so our target was to get to a county semi-final,” he said knowing now they are into the knock-out stages with a game to spare against Old Leighlin.

After losing heavily to Palatine last week, Mount Leinster Rangers resurrected their challenge with a narrow win over Old Leighlin by 3-8 to 2-9 on Sunday. Evan Kealy, Kevin McDonald and Brad Bolger scored the goals.

In the Intermediate Championship on Saturday, Kilbride finished the game with 11 players but were still good enough to beat Kildavin-Clonegal by 1-7 to 0-9. Padraic Nolan scored the only goal of the game in the opening quarter.

In the Junior ‘A’ championship, Tinryland created a bit of unwanted history when they travelled to Clonmore on Friday night and came away without even scoring a point as the home side put 3-14 on them.

Éire Óg’s 2-18 to 0-8 defeat to Ballinabranna on Sunday away from home was not that surprising but the result meant the club have fielded six times in adult fare in the championship and have failed to win even one game. The seniors drew with Bagenalstown Gaels last week while the intermediate shared the points with Naomh Eoin in their opening game.

On a happier note, it was a day to remember for Kilbride referee, James Foley, who refereed his first ever senior championship game. The poacher turned game-keeper got through the game without incident and controversy and is set for a long and successful career with the whistle.

And while the Éire Óg teams haven’t had the best of times, one of their clubmen will be involved in a huge game this weekend. Their former manager Joe Murphy will be in charge of Naas when they play Sarsfields in the Kildare Senior Football Championship quarter-final on Sunday. Murphy has already lifted one trophy in Kildare when Naas won the Division 1 league title before the Championship began. Naas continued that form into the Championship and Murphy’s team are strongly fancied to retain the title that they won for the first time in over 30 years last year. However, Sarsfields, managed by former Wicklow manager Davy Burke, have the tradition in their favour and came through a tough test last weekend against local rivals Moorefield so they will be well up for the game, particularly as they were the side beaten by Naas in last year’s final. On a sidenote, Moorefield were managed in that defeat to Sarsfields by Ger Brennan, who spent a year in Carlow in 2021 as coach and selector to the senior footballers under Niall Carew, and he was strongly linked over the weekend with vacant manager’s role at Monaghan.