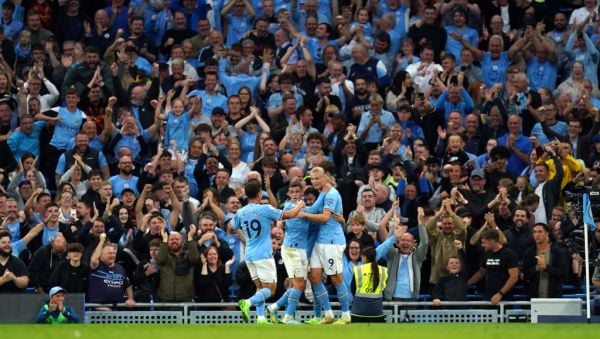 Erling Haaland continued his assault on the Premier League with a second successive hat-trick for Manchester City in the 6-0 win over Nottingham Forest.

The 22-year-old bagged a 26-minute first-half treble to put Forest to the sword, just four days after doing the same to Crystal Palace.

He is now the first player in the Premier League era to score nine goals in his first five games and surely Andy Cole and Alan Shearer’s record high of 34 goals in a season will get shattered this term.

This was also a story about another new City striker as Julian Alvarez marked his first Premier League start with a brace after the break, with Joao Cancelo also scoring.

A second hat-trick in two matches ✅

A second @EASPORTSFIFA Man of the Match award in two matches ✅

The hammering took City’s goals-for column up to 19 in five games and highlighted just how hard they are going to be to stop this season.

Forest, who have shown enough already this term to suggest their return to the top tier will not be a fleeting one, will be happy to get this fixture out of the way early on and will view Saturday’s clash against Bournemouth with far more relish.

Haaland was less than two years old when Forest, who his dad used to play for, last visited Manchester City in the league and City are an unrecognisable club from the one that won that second-tier clash 3-0 back in 2002.

They have dominated the Premier League in recent years and are an even more frightening prospect with Haaland now spearheading the attack.

This is Forest’s first season back in the top flight since 1999 and their evening soon became about damage limitation after Haaland’s early double put them in cruise control.

He needed only 12 minutes to break the deadlock as he showed a brilliant instinct to get in front of Joe Worrall at the near post and stab Phil Foden’s cross past Dean Henderson.

Forest held out for another 11 minutes before he bagged again, tapping into an empty net after Neco Williams’ tackle on Foden fell perfectly for him eight yards out.

City had another goal ruled out for offside after John Stones converted at the far post from Haaland’s flick on, but he was in an offside position.

There was no reprieve for Forest as the Norway striker ensured he would be taking another match-ball home in the 38th minute.

Foden’s cross found Stones at the back post and the centre-half headed back across goal for Haaland, who outjumped everyone to nod home from a yard out.

Haaland is not the only striker City have brought in this summer and Alvarez wanted a piece of the action, but his shot from the edge of the area rattled the post as City had to settle for three at the break.

Forest’s respite did not last long as, five minutes into the second half, it was 4-0 when Cancelo curled an impressive shot into the top corner from 20 yards.

Full time at the Etihad ⏱ pic.twitter.com/vOYhgfnZOL

The onslaught continued and Alvarez announced his arrival as well with a 65th-minute goal.

He showed he is just as reliable in front of goal after he coolly converted past Henderson after Riyad Mahrez played him in.

Pep Guardiola showed Forest some mercy as he withdrew Haaland in the 69th minute, but did introduce Kevin De Bruyne, who tried to pull the strings as City chased more goals.

It was the Belgian who created City’s sixth goal three minutes from time as he surged forward from a counter attack, which was completed by Alvarez, who slammed home.