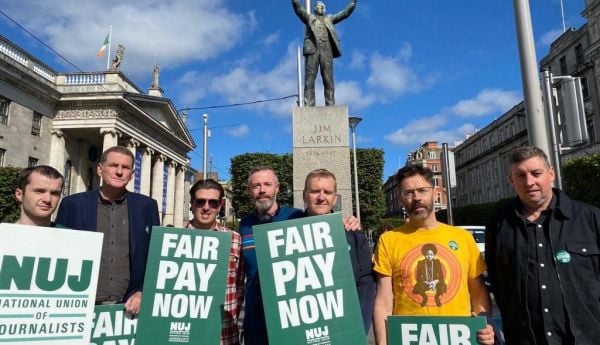 Irish journalists employed by news group Reach took part in strike action against the company on Wednesday after negotiations over pay ended without an agreement.

National Union of Journalist (NUJ) members gathered in Dublin and Belfast in solidarity with more than 1,150 Reach workers who participated in walkouts across Ireland and Britain.

Journalists voted in favour of a strike earlier this month after a final offer of a 3 per cent pay rise was rejected as insufficient in light of the soaring cost of living.

Labour Senator Marie Sherlock meets NUJ member at the Reach strike solidarity gathering in O’Street today, under the shadow of Jim Larkin. Jim would have approved of establishment at noon of new Reach Dublin chapel. pic.twitter.com/pJ6bNTPNFi

NUJ officials have also pointed to operating profits of more than £146 million (€173 million) at Reach in 2021 and the “staggering” pay package of £4 million awarded to chief executive Jim Mullen.

Union reps from across Ireland and Britain unanimously passed a vote of no confidence in Mr Mullen at a meeting on Monday.

“We have been brought to this position by the intransigence of Reach plc’s CEO Jim Mullen,” said Irish NUJ secretary Séamus Dooley.

“Yet is also a business that believes its hard-working journalists deserve a whopping real-terms pay cut, and refuses to come to an agreement on pay that will ensure our members can keep themselves and their families afloat this winter.

“It’s shameful that a media company that positions itself as a voice for communities around the UK and Ireland, with many titles that claim to be an ally of working people, would choose to treat its own staff so shabbily.”

A Reach spokesperson said: “We greatly value our journalists and are disappointed that, despite our best efforts during a long negotiation process and successful agreements with Unite and the BAJ [British Association of Journalists], we have been unable to reach an agreement with the NUJ.

“Whilst this is not the outcome we would have wished for, 2022 continues to be extremely challenging for the whole publishing sector with reduced demand for advertising and energy inflation driving the cost of newsprint to record levels.

“We therefore remain focused on protecting the interests of all our colleagues and stakeholders, ensuring the group has a sustainable future in the face of an uncertain economic climate.

“We continue to be open to further talks at any time to resolve this dispute and move forward.

“Reach’s decision not to accept the NUJ proposal was not based on one personal opinion but on a consistent agreement at the senior level to protect the future of the business.”