Kavanagh’s eventful term as IRFU President comes to an end

DES Kavanagh’s eventful term as President of the Irish Rugby Football Union came to a close at the end of Jult. In what should have been only a one-year stint, because of Covid, his term went into a full second year.

Both years brought very different situations which will be remembered for very different reasons. For the first,  the pandemic inflicted misery and sorrow on many people not just in Ireland but across the world. 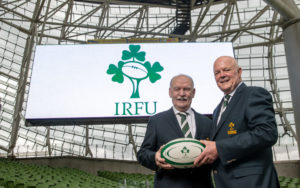 On a much lighter note, Des was in New Zealand when Ireland won a three-match test series down under for the very first time. It is a fickle world. Without Covid, Des would have travelled with the Lions to South Africa in 2021 and while those matches did go ahead, they were played behind closed doors. If Covid hadn’t been so ruthless as it made its way through the world’s population, Des would not have been asked to stay and would have been out of office after one year. No doubt he would have thoroughly enjoyed the New Zealand win but Des would not have been there if his term had not been extended.

“To have had only the first year would have been horrendous. I spent most of that first year  working through my laptop in a little office at home. There were no games apart from what we watched on TV with no crowds,” recalled the Carlow man.

“To go through lockdown was horrendous. What kept us going was sport. If you like sport,  you are very lucky. In my case, I could plan the weekend based on what games were on.”

For Des, there was so much to take out of his two years in office.

“It is a great sense of pride because things went very well. The Irish team had a great last season. They were only beaten twice, away to France and the first game in New Zealand. The under 20s won the Grand Slam and the under 20s did very well in the invitational tournament in France.

“The sevens men and women did very well in qualifying for the world Cup. We have moved a long way in terms of women’s rugby and in the last 48 hours we announced the appointment of a high-performance person. There are going to be 43 professional rugby contracts offered to the ladies.

“There has been a lot of development over the last 20 months. I was very pleased to be a part of all that,” noted Kavanagh.

Of course, the big rugby talking point in 2022 was Ireland’s test series win in New Zealand. It looked an impossible task when the visitors lost the opening test (42-19). Yet, Des says he wasn’t as pessimistic as others might have been going into the next game.

“The first game when you look back and that includes New Zealanders, they said it was a much better game and a more tighter game than it looked on the scoreboard.”

Second time out, Ireland did a job on a 14-man New Zealand side and such was their domination, Kavanagh felt they could have won it by a lot more than the 23-12 margin suggested. Then came victory in the third test and this time there was no luck attached to the 32-22 win.

Ireland left New Zealand having won the locals over.

“We were so proud of the players after the third test and, in fairness, I read some of the newspapers afterwards. In every article I read when they were often criticising their coaches and players, they always pre-empted that by praising the Irish performance and that Ireland were a class act” said Des.

“When we got to the airport to fly back there was a huge banner saying “Well done Ireland. You were a class act. See you in France next year.”

Off the field there were some memorable days where Des visited a number of places which are steeped in rugby history.

“I was invited to the New Zealand parliament by the speaker, Trevor Mallard.  It was a fantastic experience. You meet so many good people.

“The Irish ambassador, Peter Ryan,  brought us out to the home place of David Gallagher who was born in Ramelton in County Donegal. His mother and father had twelve children and left a baby behind. The father became the first captain of the All-Blacks. The town of Katikati in the school has a shrine to David Gallagher.

“They brought us to the school, to the museum. To see the history, largely Ulster history of two boat loads of Ulster people who formed that town of KatiKati was truly amazing,” said Des.

The Carlow native hasn’t totally left the IRFU yet and he will have a role in the organisation as immediate Past-President.

Sorrow would be the wrong word but he does confess that there is a sense of relief that his term is over.

“At the same time there is a sense of getting your life back,” agreed Des.

“When you are President, once things opened after Covid I would have been so busy in the last few months. Sometimes, my work with the IRFU would start on a Tuesday and there would be stuff going on every day to the following Sunday. Then it would start all over again.

“It is an experience. Anyone who would get the experience would love it for a year but you would certainly not want to be going on again. When the year is up,  you are just happy to hand over.”

Des made many friendships. He,  Jeff Blackett and Gerald Davies the respective Presidents of the English and Welsh unions  became close. He also befriended Ian Barr, the Scottish President.

They should all have been on the Lions tour.

“None of us travelled. It was very difficult in South Africa. In the normal course of events I would have gone with the Lions but it didn’t work out. There was a period of time when we wondered whether we would ever see a match again where we could all attend. There was a huge worry in terms of the professional game. Only for the Irish government we would have been in serious trouble. We got €36m over two years. That money went to the clubs, the provinces. It went towards balancing the books in the IRFU. Only for that support there would have been dire consequences,” pointed out Des.

Yet it was in Ireland where Des was most relaxed.

“At different levels, there were many highlights but one, when I was asked to speak on the same agenda as Taoiseach, Micheál Martin at the opening of the International Mixed Ability Rugby Festival in Cork. That was huge to see hundreds of athletes there from South America,  different countries in Europe and Irish teams. Boys and girls who were having a great time having a fantastic time.

“I could go through so many different parts of the year. I was in Belfast when the Women’s team won the last match. The huge excitement after they scored the winning try late on. To see the excitement. They have had to fight back from a lot of negatives and were able to celebrate a great win.”

“The atmosphere, the excitement, the real rugby families who were there from two local clubs in the North was fantastic,” praised Des.

He also made  made the point of attending as many social gatherings which were arranged by the referee’s association. He says it is vital that the referees know what an important part they play in the promotion of rugby across the island.

“Without them we have nothing. I made the point of recognising this whether it was Connacht, Ulster, it was  important for me as President to say a sincere thank you for what they do for our game.”

At the end of the day, Des is a proud Carlow man. There was even a reminder of that when he came home from New Zealand and watched as a former Carlow player seemed to appear in the crowds in every recording of the three test matches.

“I watched all the games since I came back, Joe Hanley and his wife are pictured all the time. He must be very photogenic because he was pictured at every match. Then to meet Ed Byrne when he got out there. To meet Cian Prendergast whose mother is a Ware from Rathnapish. When I spoke, I always referenced that I came through as someone who worked with the youths in Carlow and that my club was a small club in south-east Ireland,” stressed Des.

If he ever has to give a resumé of his own career and where he started he always refers to County Carlow FC.

“I spoke about the fabric of the club. The fabric of our club is the fabric of rugby in Ireland. It started with minis and went right through. We always spoke about being community clubs. We have achieved that now. Not alone do we have girls and women playing but we have people with disabilities who are playing our game. It is important that we have inclusivity in all parts of our population. All parts of our community are encapsulated in that there is a place for everyone in our game. I got great pleasure talking about that,” explained Des.

He will go back to the grass-roots of the game now.

“I will continue to do bits and pieces. I always make the point that I am very privileged with the opportunities I have been given. I would never have had that if I had not been associated with County Carlow.” 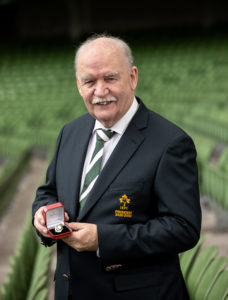 His family will also get more attention but they are also doing their own thing now.

“My wife, Marie, and I had a great time. When we got married I discovered my wife had two sports which she liked. Rugby and boxing. We watched the boxing with Harry Carpenter and when our own kids came along it was rugby, rugby, rugby. Marie enjoyed every minute of club dinners all over Leinster and different parts of the country. She has made friends with rugby people in all four provinces. She would tell you now she had a ball.

“Our sons, Graham is coaching in Clonmel underage. Wesleigh is coaching in Clane underage, Adam is coaching in Carlow underage. My two daughters,  Keeva and Kirsty,  both love rugby,” says a proud Carlow man who rose through the ranks of the Irish Rugby Football Union and played a significant and important part for Ireland in difficult Covid and  historic rugby times.