Three birdies in the last five holes proved crucial for the Carlow Golf Club Professional who was level with McElhinney going into the third and final round. 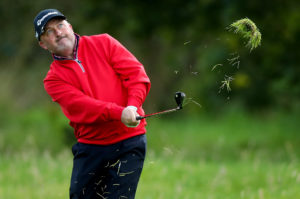 The North West Golf club professional, who  did nothing wrong all day, registered a sold one under par 71 but found McGrane in irresistible form over the weekend. Simon Thornton, the Tulafarris Golf Club, professional took third place.

In the final round a birdie on the par four 12th should have been the platform for the eventual winner to gather momentum for a winning charge but a double bogey on the next hole, the par 5 13th, all but cancelled that out.

The former European Tour winner didn’t let that upset him and he birdied the next hole.

“It was one of those things in a strong cross breeze, I entered the heavy rough. Obviously, I was being a little bit enthusiastic about the next shot and didn’t get it out of the rough. I got the next one but as you know, when it starts to unravel, it happens pretty quickly. I birdied 12 and birdied 14 so mentally that half an hour of golf I went into it level par and walked out of it level par which, you could say, I dodged a bullet,” said McGrane.

He was in good spirits as he approached the last four holes.  He parred the par 3 16th and then made his final move for victory.

“I birdied 17 to go ahead and the 18th is a gettable par five . I hit two really good shots ending up just over the green. My two playing partners were just short but short of the green  was very bad news for them. They had a very tough spot so they were hard up and downs. They both made pars and I had an easy up and down. I managed to get it up to three feet and rolled in the putt.”

The Meath man, who is settling well into Carlow Golf Club,   readily admits he rarely practices and just enjoys a round or two whenever it fancies him. He went up to County Mayo without making any promises to himself.

“I got into a groove in the first round and all of a sudden out of nowhere, and without preparation, I found myself playing well and was doing all the right things. I played well from start to finish which was a big bonus where my colleagues around me were making mistakes. On a tough course you pay a price every time.

“I had a good finish in the second round to finish three under. Then in the final round, I had another good finish to shoot three under (for the round) and to win by two was nice. I enjoyed winning but the golf clubs will be back in the shed until the next time I take them out,” he said.

An added bonus for him was that his son Ethon played in the competition too and while he didn’t make the cut, Damien’s daughter, Gemma, joined them and caddied for the champion in waiting on the final round.

“It was nice for me to spend time with her on the golf course. It took away some of the distraction and the pressure of trying to win. I was able to use it to my advantage. As I said in another interview, it is going to stand to both of us as a life-long memory. It is a nice aspect to the game. As much as it breaks our hearts most of the time, there is a nice side it brings families together, it brings friends together, it brings colleagues together and club members together. It was a joyous moment for me for sure.”