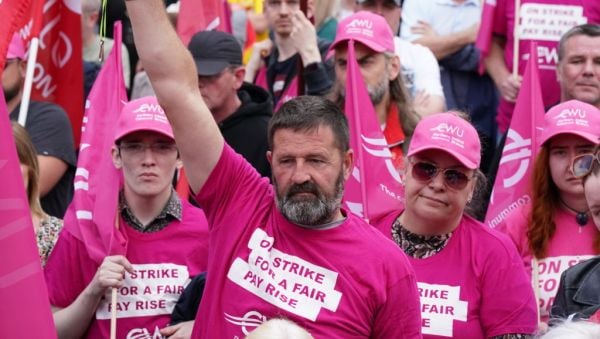 Postal and telecoms workers have gathered in Belfast city centre to demand better pay amid the cost-of-living crisis.

A crowd of hundreds congregated outside City Hall at the rally organised by the Communication Workers Union (CWU).

Members of other trade unions stood in solidarity with the Royal Mail, BT and Openreach workers and their strike action over pay.

Representatives from a range of trade unions addressed the crowd from a platform at the lunchtime event.

Elsewhere in Belfast, staff working for the Reach media group also staged a picket amid an ongoing pay dispute.

It came as Reach colleagues across the UK and Ireland walked out after weekend negotiations between the company and the National Union of Journalists (NUJ) ended without agreement.

At the rally at City Hall, CWU national executive council member Andy Mercer said: “The message has been loud and clear – our members are 100% behind this trade union and 100% behind their colleagues.

“We’ve seen that from the votes that they returned in the ballots that we have done and certainly on the picket lines.

“There’s very few Openreach and BT workers working and very few Royal Mail group workers working over these strike days and that gives us the biggest show of support that we can get as a trade union.

“The cost of inflation is impacting on all of our members, but what they’re telling us is if they don’t fight it now and they don’t win this fight, it’s only going to get worse in the future. Enough is enough.

“It’s time big companies and CEOs realise they need to start rewarding their workers and not themselves and that is the message that comes loud and clear from our members.”

Royal Mail has criticised the action. It said the company is losing £1 million a day and claimed the CWU’s strike was “making our situation worse”.

The BT and Openreach action is protesting against the BT Group’s flat-rate pay rise of £1,500.

The BT Group said it had made the best pay award it could, insisting it was the highest increase in 20 years.

Reach said it was disappointed that talks with the NUJ failed to reach agreement but highlighted the need to ensure the group has a sustainable future in the face of an uncertain economic climate.

It said it remained open to further negotiations to resolve the dispute.