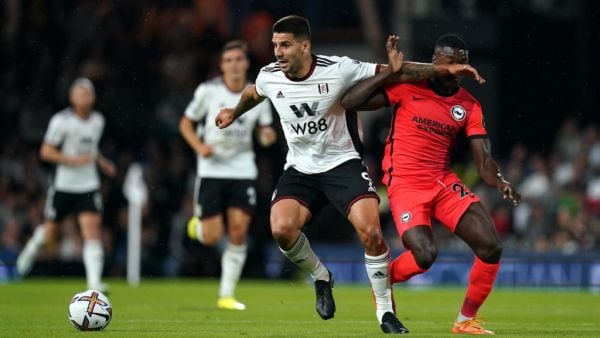 Bernd Leno hailed Aleksandar Mitrovic as Fulham’s most important player after his goal helped the club win 2-1 against Brighton on Tuesday.

The Serbian forward’s sliding tap-in broke the deadlock just after half-time and took his tally for the embryonic season to five goals, already exceeding his total of three scored across the west London club’s last Premier League season.

A Lewis Dunk own goal handed Fulham a second, but they had to hold on after Alexis Mac Allister reduced the deficit from the penalty spot on the hour mark.

Goalkeeper Leno, who arrived from Arsenal during the summer transfer window, even said his former team-mates knew Mitrovic is difficult to play against.

“He’s full of confidence and full of quality, the way he plays and keeps the ball, and the way he scores goals is exceptional,” Leno said.

“He’s so important for us — probably the most important player for us — so we’re really happy to have him here.

“I spoke to the Arsenal guys a couple of days ago and they said, ‘He so tough to play against’.

Fulham have started their season brightly. They remain unbeaten at Craven Cottage and have eight points from their opening five matches including a draw against Liverpool on the opening day.

Speaking after the Brighton clash, Leno added: “We have the three points and our home record is still top. The manager has said the home games are the key and we can be very happy with the start of the season.

“And now we have two big games against Tottenham and Chelsea.”

Mac Allister, who scored Brighton’s only goal of the game, wants the Seagulls to bounce back against Leicester at the weekend.

“We don’t think too much about the league table, we have to go match by match, so we will rest and recover then prepare to be back at the Amex on Sunday in front of our fans,” he told the club website.