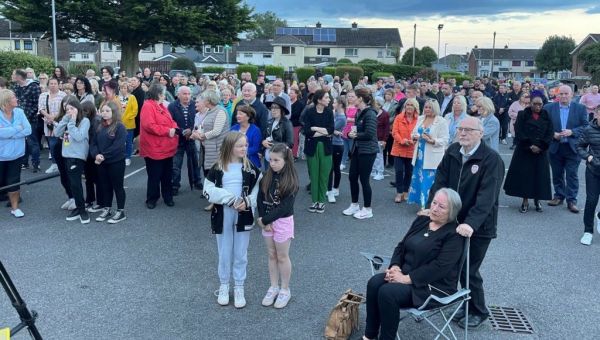 Hundreds of people have attended a vigil following the tragic deaths of two teenage boys in a Co Derry lough.

Those in attendance outside St Oliver Plunkett Church in Strathfoyle on Thursday evening held candles in memory of Reuven Simon and Joseph Sebastian.

The two 16-year-olds had been swimming at Lough Enagh on Monday evening when they got into difficulty.

The event, which was attended by several local politicians, began with songs from a folk group.

Later, prayers were offered and SDLP MLA Mark Durkan said the community had been hit by an “unspeakable tragedy”.

Local man Ralph Dixon said the community had turned out to show support for the two grieving families.

He said: “I knew one of the fathers. We all stand together in this community.”

The two boys were from the city’s Indian Keralan community and had been due to return to St Columb’s College after receiving their GCSE results last week.

The boys will be laid to rest on Friday following a joint funeral service at St Mary’s Church, Ardmore.

The Mass will be conducted according to the Rites of the Syro-Malabar Church, incorporating the music and Malayalam language of India.

Flowers have been left at the scene of the tragedy and a book of condolence was opened at the Guildhall in Derry on Wednesday afternoon.

There have been calls to improve safety measures around the lough.

Foyle Search and Rescue (FSR) said there should be more warnings around how deep the water is, as well as guidance on what to do if you get into difficulty and better availability of life rings around the area.

Police are carrying out inquiries into the incident, but said they believe it was a tragic drowning incident.