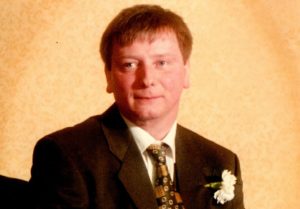 The late Ken Agar. A memorial run to mark his 20th anniversary will take place on 10 September

A MASSIVE road run takes place next week to mark the 20th anniversary of the passing of a beloved Bagenalstown man.

The Ken Agar Memorial Run will be held on Saturday 10 September, starting from Fenagh, with 500 to 600 vehicles of all varieties expected to take part. Ken was 36 when he died in a motorcycle accident on 30 August 1992.

The idea of the memorial run was spearheaded by Ken’s nephew Stephen Agar, who said: “He was massively involved with the vintage scene and we decided to have a memorial road run to mark the 20 years.”

Son of Hilda and Fred, Ken was one of six children who grew up in Ballymoon, Bagenalstown. He was qualified fitter and worked in Burnside and Tanco in Bagenalstown and Aero Motors in Dublin.

His brother Alan established the Alan Agar Haulage Company and Ken was working with the firm at the time of his passing. A single man, Ken was living with his mother at the family home. It was a devasting time for his family and his many friends.

Ken was heavily involved with the local steam rally in Fenagh and went to rallies with a group of local enthusiasts, who would go on to form the Carlow to Cork Tractor Club. Both Stephen and Ken are members of the tractor club and its members will be volunteering on the day to ensure everything goes smoothly.

Stephen said that people will be coming to Fenagh from all over for the event … from Cork, Northern Ireland, Offaly, and even some relatives from Canada. The date for the run also coincides with the 50th anniversary of the first-ever steam rally in Fenagh. 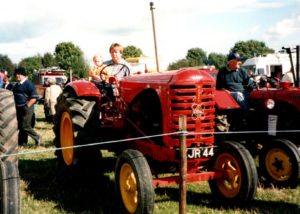 Proceeds from the memorial run will go to the Carlow Kilkenny Homecare Team and the Children’s Medical Research Foundation at Crumlin Hospital.

The event begins in Fenagh from the Barracks lawn. All vehicles are welcome to take part, including tractors, cars and bikes – modern and vintage. Registration starts at 11am and the run will take place at 2pm.

Tractors will depart from Fenagh on one route, with the other vehicles taking a separate road.

Tractors will head for Hunter’s Cross onto the Wexford/Carlow Road, the Fighting Cocks pub, Nurney, Bagenalstown and back to Fenagh. The other route takes in Hunter’s Cross before heading to Tinryland, onto the M9 and exiting at Paulstown to continue to Gowran, Goresbridge, Bagenalstown and back to Fenagh. The run will take about 80 minutes. Vehicle registration is €20, while raffle tickets will also be on sale.

Other attractions include a display of a steam engine threshing wheat, while another engine will utilise a saw bench that Ken worked on to cut timber.

Live entertainment will be provided in Kearney’s and the Hunter’s Rest after the event, with a monster raffle and auction taking place. Thousands of valuable prizes will be on offer as well as an auction for a signed Leinster jersey.

The charities were selected as they are both close to the heart of Ken’s family. Ken’s father Fred passed away from cancer and the homecare team provided great care in his latter days. Ken’s niece Shannon was also very sick as a child and received life-saving care at Crumlin Hospital.

The memorial run will be a great occasion to celebrate Ken’s life. He had several vintage tractors and had been working  on a dismantled Ford tractor for the Fenagh Steam Rally when he died.

Mervyn said: “It was left like that for a while, but we all came to put it together and have it kept in this memory. That will be the tractor leading out the run on the day. Stephen will be out driving it.”