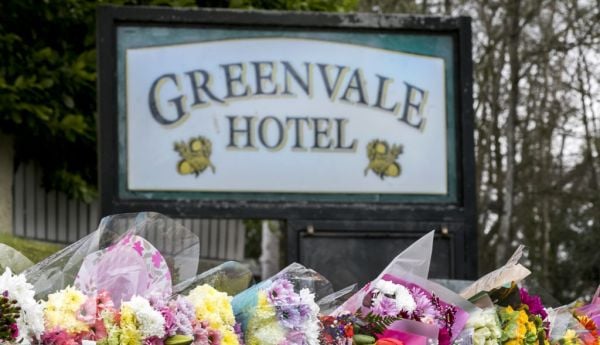 Two men and a company will be prosecuted in connection with the deaths of three teenagers outside a St Patrick’s Day disco more than three years ago.

Connor Currie (16) and 17-year-olds Lauren Bullock and Morgan Barnard lost their lives in a fatal crush as hundreds queued at the doors of the Greenvale Hotel, in Cookstown, Co Tyrone, for a disco on March 17th, 2019.

The same two individuals will also be charged with one offence of contravening the Health and Safety at Work (Northern Ireland) Order 1978.

Meanwhile, the company which runs the Greenvale Hotel, known as Tobin Limited, will also face one charge of contravening the same Health and Safety legislation.

Senior Public Prosecutor Graham Cardwell said he acknowledges the day will be one of mixed emotions for the families of the three young people who died. He also thanked them for their patience.

“The files received from the PSNI and the Police Ombudsman were voluminous and detailed and there were a considerable number of complex issues that required careful consideration,” he said.

“I am grateful to the families for their patience as the PPS took the time needed to complete the significant task of examining all available evidence before reaching decisions on whether there was a reasonable prospect of conviction in relation to each suspect.

“I have informed the families that whilst the Test for Prosecution was met in respect of two suspects, it was considered not to be met on evidential grounds in respect of all other individuals reported in connection with events at the Greenvale Hotel that night.

“Detailed reasons for these decisions not to prosecute have been provided in writing to the families and we have also offered to meet in person.

“Whilst some of the no prosecution decisions may be disappointing to them, I can reassure the families, and the wider public, that all decisions were taken independently and only after a most thorough examination of all evidence and information available.

“Criminal proceedings will commence in due course and we will continue to engage directly with the families involved as the prosecution progresses.”

Greenvale Hotel owner Michael McEllhatton said on Thursday: “I am conscious that this is a highly sensitive time for the families and I feel that it would be inappropriate to comment at this time.”

Of the nine who will not be prosecuted, seven were described as door staff and two as having roles in connection with entertainment and hotel management respectively.

The PPS concluded each of the nine could have exercised very little control over the planning for and management of the events which unfolded, or alternatively held a role which carried little responsibility for the safety of hotel patrons.

Following a separate investigation, the Police Ombudsman reported five police officers for the potential offence of misconduct in public office.

A call dispatcher was concluded to have communicated, in good faith and without delay, the key information that he received directly as a result of the 999 call. The PPS concluded it could not be established that he had misconducted himself.

The remaining four officers considered were three constables and one temporary sergeant who were travelling in pairs in separate cars at the time.

It was concluded by the PPS that the available evidence was insufficient to establish that the reported officers recognised the seriousness or exact nature of the situation that was unfolding.

There was difficulty in establishing exactly what they heard over the police communications and there was some initial confusion as to whether the incident was a public order situation, either inside or outside the hotel.

The approach taken by the sergeant was to immediately seek additional police resources so that his officers could safely take any necessary action.

The PPS is to prosecute two individuals and one company in relation to the deaths of three teenagers following an incident at the Greenvale Hotel, Cookstown in March 2019.

You can read a full statement at the link below. https://t.co/Ok9G9TFDPw

Police observations of the queue at the front of the hotel failed to identify any emergency and police also received assurances from inside the hotel that the situation was under control.

Mr Cardwell said the offence of misconduct in a public office is committed where a public officer, without reasonable excuse or justification, wilfully neglects to perform his duty to such a degree as to amount to an abuse of the public’s trust in the office holder.

“The threshold for this offence is high. I have concluded that the Test for Prosecution is not met against any of the five officers,” he said.

“The evidence was not capable of establishing any bad faith or improper motive in the actions of police at the scene or that they wilfully ignored a high-risk situation of which they were aware.”

Police Ombudsman Marie Anderson said she will now consider whether there is evidence of misconduct by any officer.

“My role as an investigator is to assess the evidence and submit files to the PPS to make a decision as to whether an officer should be prosecuted for the potential offence of Misconduct in Public Office,” she said.

“Now that the PPS has directed that no officer should be prosecuted, I will consider whether there is evidence of misconduct by any officer.

“Where there are grounds to do so, I will make appropriate recommendations to the Chief Constable.

“I thank the families for their ongoing patience during this process.”