A few years ago, Killeshin approved work on a brand new astroturf pitch and a new clubhouse at Scats Quakers Park. On Saturday, the club finally opened the brand new, state of the art clubhouse and club Secretary Ian McDonald says it was the culmination of year’s worth of voluntary work and donations. 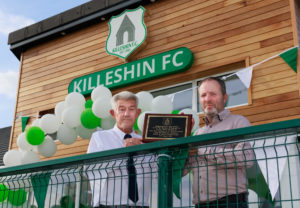 “We had a sod turning two years ago for both the 3G FIFA Pitch and the Clubhouse. We unveiled a plaque for it on Saturday to commemorate the sod turning. That was performed by Minister Charlie Flanagan, Sean Fleming TD and Noel Jordan, Chairman CDFL. It’s the culmination of huge community support for fundraisers over the past five or six years. We were also awarded Leader funding through Laois Partnership and Laois LCDC for the pitch. We were also awarded Sports Capital funding for the clubhouse. It was great to be able to invite everyone, when we did the sod turning it was during Covid times so we couldn’t extend invites. The clubhouse was built by local contractors, JC Brenco, which was important to us because of the community support for the project and the pitch was constructed by Premier Pitches. It wouldn’t have been possible without the huge community support for all the fundraisers we held.”

The ribbon on the clubhouse was due to be cut by former player, Kylie Murphy but she was unavailable on the day due to playing for Wexford against Bohemians so her father, Pat did the honours on her behalf. He was assisted by FAI President Gerry McAnaney and General Secretary of the Leinster Football Association, Peter Doyle. Also in attendance was Carlow District Juvenile League Chairman Bob Howson and Secretary John Collins. 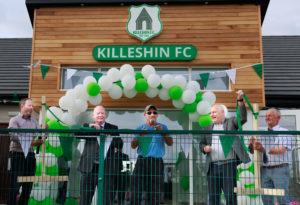 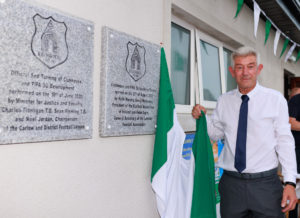 Overall he says it was a good day with a good turnout. “We had about 250-300 people in attendance, the weather was perfect for it too. We started off the day with our Over 35’s playing at home and then we held a skills contest for the kids before having the unveiling ceremony at 5.30pm. Joint Chairman, Joe Whelan was MC for the day. He introduced things and spoke, Noel Jordan then presented a plaque to the club to commemorate the day, Peter Doyle then spoke and also presented a plaque to the club. The President of the FAI, Gerry McAnaney also spoke and gave a few words on the project. The day was finished by the other joint Chairman, Ger Dunne saying a few words and then I said a few words too. We had a couple of blessings too, our parish priest, Fr. John Dunphy blessed the clubhouse and then Fr. Sean Kelly, Curate for Graiguecullen/Killeshin blessed the astro pitch.”