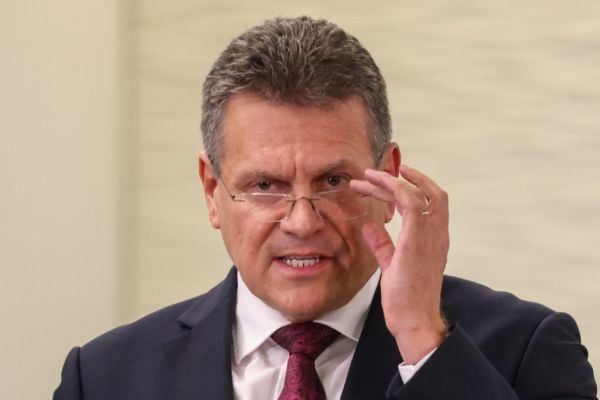 Controversial legislation from the British government that would empower UK ministers to unilaterally override parts of the Northern Ireland Protocol is damaging trust and respect with the EU, Maros Sefcovic has said.

The European Commission vice president also warned in a speech to the British-Irish Association conference in Oxford that it was “legally and politically inconceivable” for the UK government to attempt to modify conditions under which goods can enter the EU single market.

The UK government is progressing its Bill to give ministers powers to scrap the checks on Irish Sea trade created by the post-Brexit protocol which was jointly agreed by the UK and EU as part of the Brexit Withdrawal Agreement to keep the Irish land border free-flowing.

However, Mr Sefcovic said the EU had already put forward “far-reaching” proposals to address issues of concern raised by stakeholders in Northern Ireland about the operation of the protocol.

Only joint solutions can create the certainty that Northern Ireland deserves. I stand ready to work constructively with any new UK interlocutor to find a common solution within the Protocol. The EU never leaves the table.

He said the EU proposals would create an express lane for goods moving from Britain to Northern Ireland and reduce sanitary and phytosanitary checks and controls by more than 80 per cent.

He said: “These proposals have, however, never been seriously picked up by my counterparts. In short, they were dismissed without consideration.

“The UK has not even engaged in any meaningful discussions with us since February.

“Instead, we are now faced with the UK government’s continuing determination to push forward the Northern Ireland Protocol Bill, set to disapply core elements of the Protocol.

“This unilateral action is naturally of great concern to the EU.

“It is not for the UK government alone to change our bilateral agreement and modify the conditions under which goods can enter the EU’s Single Market and reach our consumers.

“This is simply legally and politically inconceivable.

“This clear breach of international law is extremely damaging to mutual trust and respect between the EU and the UK.”

Mr Sefcovic said by pursuing the Bill in the face of criticism, the UK government is creating “deep uncertainty” for businesses and people in Northern Ireland.

He added: “Only joint solutions can create the legal certainty and predictability that people and businesses in Northern Ireland need and deserve.

“I am convinced that with political will and commitment, we can still explore the full potential of our far-reaching proposals and find a way forward.

“This call to the UK government to engage with us has been clear for over a year.

“And it still stands – also vis-a-vis the incoming UK prime minister and government.

“Further unilateral action may give the impression to many in the EU that the UK leadership is not that interested in co-operation with the EU.

“For my part, I stand ready to work intensively and constructively with any new UK interlocutor to find a common solution within the protocol.

“The EU will never leave the table.”