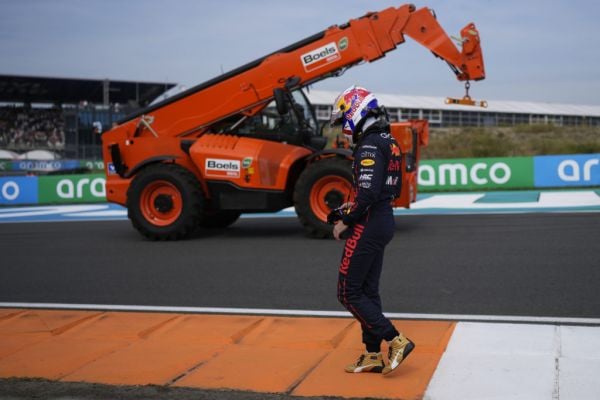 The one-hour running at Zandvoort was only 10 minutes old when world champion Verstappen stopped on track with smoke pouring out the back of his Red Bull.

“Something went with the gearbox,” the Dutchman reported, leaving his orange-clad supporters stunned into silence.

Verstappen has stopped out on track

The action was suspended for nine minutes as Verstappen’s wounded machine was towed away.

But his absence on Friday allowed Russell to clock the fastest time in an encouraging show from Mercedes.

Hamilton crashed out on the opening lap at Spa-Francorchamps following a collision with Fernando Alonso.

Hamilton’s early bath capped a poor weekend for the seven-time world champion and his Mercedes team.

But on the evidence of first practice, the shorter, twisty Zandvoort circuit appears better suited to the Silver Arrows with Russell 0.240 seconds clear of Hamilton.

On an promising opening run of the weekend for McLaren, Norris’ team-mate Daniel Ricciardo took fifth, one spot ahead of Ferrari driver Charles Leclerc.

It’s a one-two for @MercedesAMGF1 👀@OconEsteban and @NicholasLatifi record the most laps 📈#DutchGP #F1 pic.twitter.com/SGzba7foaG

Sergio Perez ran off the road at Turn 9 and, while he was able to continue, the Mexican finished only seventh – a full second back.

Alonso, who called Hamilton an “idiot” at the last round before apologising to the British driver here on Thursday, was eighth, ahead of both Aston Martins.

Vettel, who is retiring at the end of the campaign, impeded Norris in the closing moments. The incident at Turn 12 has been noted by the stewards.