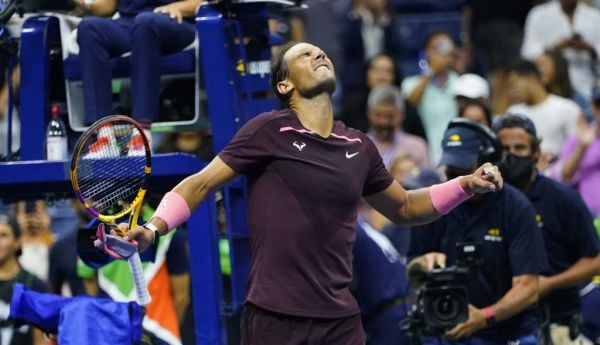 Rafael Nadal recovered from a very shaky start to defeat Fabio Fognini and reach the third round of the US Open.

The second seed, who has not lost before the last 32 in New York since 2004, trailed by a set and 4-2 and was struggling to put the ball in the court.

But, with some help from a similarly wayward opponent, Nadal turned things around and finished strongly in a 2-6 6-4 6-2 6-1 victory to set up a clash with fellow veteran Richard Gasquet.

Rafa turns on the jets to blow past Fognini. pic.twitter.com/QXjwqvw0wP

The Spaniard had played only one match since sustaining an abdominal tear at Wimbledon prior to arriving at Flushing Meadows and was wary of fully committing to his serve.

It was not just the serve that was having an off day initially on Arthur Ashe Stadium, with Nadal spraying groundstrokes and missing routine balls.

Across the first two sets he made 27 unforced errors and dropped serve five times, including four in a row.

Fognini had not had to do anything special to put himself in a position to repeat his 2015 triumph here over Nadal but, when the Spaniard began to at last find his range, his opponent could not respond.

Having sought treatment for blisters in the second set, there was a bizarre moment in the fourth when Nadal hit himself in the nose with his racket and needed a medical timeout after drawing blood.

But he was fully in control by that time and the incident did not derail his momentum, although he will be well aware he will need to play much better if he is to challenge for a fifth title here.

Nadal’s countryman Carlos Alcaraz had a more comfortable time of it earlier in the day, defeating Federico Coria 6-2 6-1 7-5.

Andrey Rublev and Jannik Sinner, who both had five-set battles in the first round, won comfortably this time but eighth seed Hubert Hurkacz is out after a shock 6-4 4-6 7-6 (5) 6-3 loss to Ilya Ivashka and Grigor Dimitrov also fell.