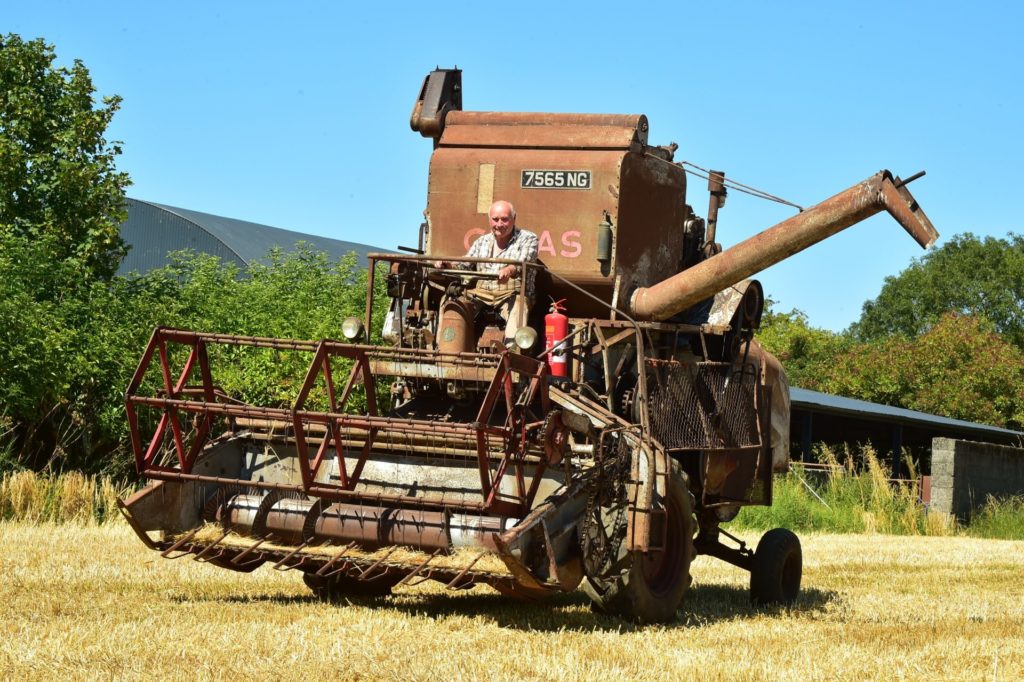 THERE’S life in the old dog yet … or in this case, still plenty left in the tank with no sign of bailing out!

A 1958 Claas SF combine belonging to Bagenalstown man Noel Aughney took to the fields of Rathduff, Bagenalstown for this year’s harvest, proving that she could still cut it with the best of them.

The machine was bought by the late Jerry Aughney over 60 years ago, when he decided to trade his 1949 super Claas bought from McCullagh’s of Ballybough, north Co Dublin and operated by a Nuffield universal (TVO) tractor with a PTO shaft.

In October 1958, the super was traded at Meredith’s yard in Ballintubber, Co Laois, then regional distributors for Claas.

The brand-new machine, known as Class SF combine had an LD four-cylinder diesel engine and an eight-inch cutter head table up front. This new machine was subsequently collected in early April 1959, so the harvest of that year would have been a doddle for the new system.

The striking machine continued in its original shape until May 1975, which Noel recalls was another great season weatherwise.

“So then it was decided to update things a bit by dismantling the bagging screen system and the sack carrying chute also, as to install a bulk grain tank,” explained Noel.

“All of this in the interest of labour and saving time efficiently for delivering the product. Also dismantled was the low-density bale trusser on rear,” he added.

The gain on this was that with no power steering, the job was much easier to do and to steer incidentally all these antiquities that are still available, including crop dividers for the front of the machine.

“So from the 1960s to the ’90s, this machine harvested every year on our home farm and also neighbouring farms for a living,” said Noel. During the noughties, the harvester went on, but just for light duty until a replacement arrived.

For harvest 2022, the combine, known as Alice, was brought out of storage and put through her paces on a beautiful ledge of malting barley. She had a few minor operational adjustments to ensure the completion and success of her three-hour test, after coming out of hibernation of a two-year absence.

“All the comments I experienced by onlookers of diverse standing and opinion were incredibly complimentary and interesting, supportive all around with respect to age and performance of Alice,” concluded Noel.