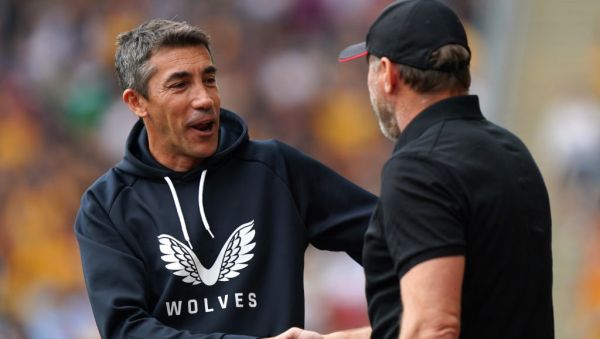 Wolves boss Bruno Lage feels his side can flourish after securing their first Premier League win of the season.

Daniel Podence’s scuffed finish in first-half stoppage time was enough to beat Southampton 1-0 at Molineux and lift Wolves out of the bottom three.

It was their first top-flight win in 13 matches, stretching back to April 2nd last season.

Lage said: “I told the players ‘the best thing the three points can give you is tranquillity to play at our level’.

“The points can give us the confidence and to be honest it also came from the fans. Since the first minute they were there. They were singing ‘Bruno Lage-ball’.

“What I want is for my players to have big confidence to play our game because we didn’t start well but we have a team and time to still do well in the competition.”

Rayan Ait-Nouri and Pedro Neto both wasted first-half scoring chances for Wolves before Matheus Nunes’ superb cross was met by Podence’s mis-hit finish, which bobbled over the goal-line.

Lage added: “I think we played a perfect first half in controlling everything – how to press high and how to control the aerial duels and second balls.

“The second half was a little bit more balanced. They are a strong team, they are very good in the duels, they put on a lot of pressure.

“But I think we controlled everything. They also had one or to good chances to score but we deserved this victory with a good performance and the first three points.”

The Portuguese confirmed latest signing Sasa Kalajdzic was withdrawn at half-time due to a minor knock having had a quiet debut.

Lage said Kalajdzic and fellow striker Raul Jimenez – rested due to fatigue – would probably be in contention for next Saturday’s game at Liverpool.

Southampton spent most of the second half on the front foot and created several chances.

Che Adams had a headed effort ruled out after referee John Brooks indicated the ball had hit his arm and later headed substitute Stuart Armstrong’s cross against the bar.

Saints boss Ralph Hasenhuttl said: “When we speak about defeats, that hurt. This is one of the most hurting ones because the chances we had in the second half must be goals.

“Che (Adams) knows this but he did a fantastic job working for the team. It is really frustrating when you see that such a ball is going into the net (and) is not a goal.”

Hasenhuttl used all five substitutes and handed Samuel Edozie and Ainsley Maitland-Niles their club debuts off the bench.

He added: “I like these brave young guys. They come in and are not scared.

“We tried to spin the wheel to create chances in the second half, we went all-in with the young lads.”