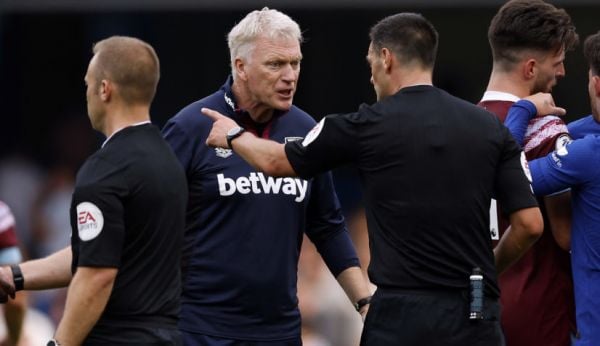 West Ham boss Moyes accused Edouard Mendy of twice faking injury, as his side were denied a draw when Maxwel Cornet’s goal was chalked off after a VAR review.

After a VAR check, Andy Madley has ruled the goal out for an alleged foul on Mendy.#CHEWHU 2-1 (91) https://t.co/fjpcT5FuEF

Mendy spilled the ball, allowing Cornet the chance to level, but VAR ordered Madley to review the incident on the pitchside monitors and the effort was duly ruled out.

An incensed Moyes insisted he had “lost faith” in “weak” Premier League refereeing standards in an extended rant in the wake of the Stamford Bridge defeat.

Asked if he had sought out an explanation when confronting the referee after the match, Moyes replied: “No, I didn’t want an explanation from him, because it would have been a tough one for him to give, wouldn’t it?

“It would have been a tough one for him to try to justify. He couldn’t.

“The goalkeeper comes to take it, and actually fumbles it out of his hands five or six yards, so he could never recover it.

“Then he acted as if he had a shoulder injury. I’m amazed that VAR sent the referee for him to see it.

“But I thought even if he goes to the TV there’s no way he’s overturning this, because this is a goal. It was a ridiculously bad decision.

“I’d question VAR today as much as the referee. But the referee should have stuck to his own guns today.

“The sad thing is this is the level of the weak refereeing at the moment.

“I think the worst thing is we’re sitting and watching it. We’ve been told there would be more contact. But that sounds as if there’s no contact with any goalies, and we didn’t get told that.

“And actually the goalkeeper tried to fake an injury on the first goal as well. And he did the same on the second goal.

“Jarrod said he never touched the goalkeeper at all. And if you look at it, he jumps him.

“There might have been a trailing foot if there was anything at all.

“The ball had come off him, four, five, six yards and he couldn’t recover it.

“If you ask me then he faked a shoulder injury, it didn’t affect him playing the last 15 minutes.

“But if you’re saying today that the referee’s mistake was corrected by VAR, I’m saying I do not see that in a million years.

“And I’m actually more embarrassed for the guy who did the VAR than I am even for the referee.

“Because that’s telling me it’s someone who doesn’t understand football and probably shouldn’t be near it, if they think that was enough to send the referee to the screen.”

That’s up there with one of the worst VAR decisions made since it’s come into the game. Shambles 😂

West Ham star Declan Rice took to social media to vent his own frustrations, posting on Twitter: “That’s up there with one of the worst VAR decisions made since it’s come into the game. Shambles.”

When asked if he would countenance any of his players possibly play-acting, Moyes replied: “I actually think it’s a bit of an insulting question to me. Because I don’t put my team out to do that.

“I’m not saying it doesn’t happen, but I certainly don’t set my team up that way. So I find that a wee bit insulting, because, if you know me, I wouldn’t do that.

“The football we play in this country is unique, and it’s unique because of the level of chances, the speed of the game today, the ball-in-play time.

“I managed in Spain, more people dived, the difference in the Premier League is we’ve got a really good product.

“And today, the referees said they would be changing from soft decisions. If there was any decision today that was unbelievably soft (it was that one).”

Michail Antonio had put West Ham into a second-half lead, before Ben Chilwell levelled and then teed up Kai Havertz for what proved to be Chelsea’s winner.

Blues boss Thomas Tuchel insisted Cornet’s possible Hammers equaliser was right to have been ruled out.

“I will not comment any more because what happened against Tottenham was so obvious and I paid a lot of money for commenting, so I will not do it again.”