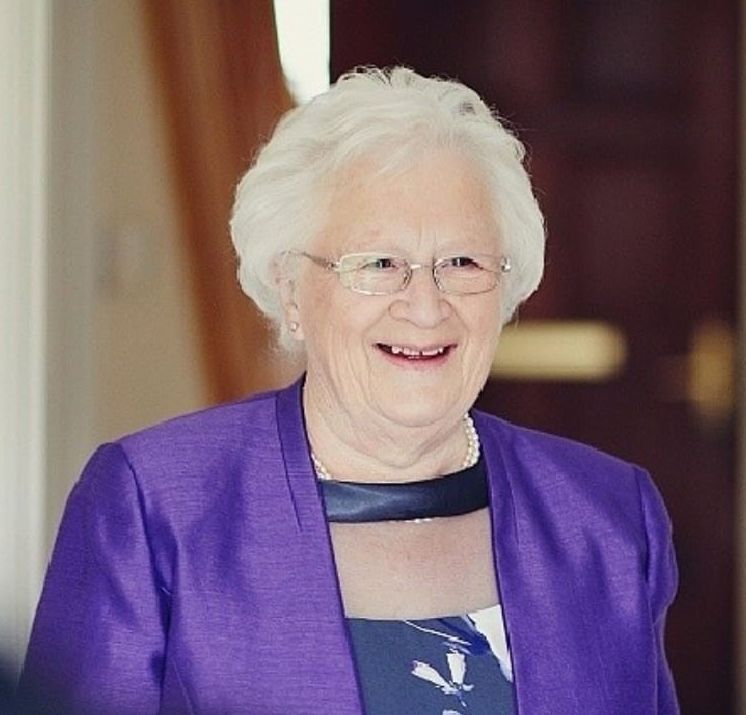 MAGGIE Byrne (née O’Reilly), wife, mother, grandmother and great-grandmother, passed away peacefully on 2 July in Naas General Hospital aged  82 after a short illness and having lived a life so full that most people could only aspire to doing half of what she managed to do.

Because not only was she a dedicated family woman to her husband Stephen (who passed away 27 years ago) and their eight children,  she was also deeply committed to helping others.

It was in her nature to be kind to people and to do whatever she could to help if that person needed help. That included people around her in her community of Tuckmill and Baltinglass and far beyond. Old or young, a stranger or a neighbour, Maggie had a sense of how to take care of people and, moreover, enable them to help themselves, too.

But she was also a deeply spiritual person and when she became sacristan of St Joseph’s Church, Baltinglass in her latter years, it was a role that was made for her.

Indeed, it was a measure of respect  of her dedication to the parish that Bishop Denis Nulty, Bishop of Kildare and Leighlin, along with Mgr Brendan Byrne, travelled up Tuckmill Hill to pay their respects at her wake.

Maggie would have been tickled pink at the thought that the bishop was there!

Born in Ballycarrigeen, Co Wicklow in 1940, Maggie O’Reilly was just six years’ old when her mother Mary died. One of six children, she was reared by her dad Paddy and eldest sister Mary. She attended Talbotstown NS and Baltinglass Vocational School while living with her aunt Harriet McDonnell at Coolnarrig.

Maggie had ambitions to be a nurse and like legions of other young women at that time went to England to train. She went to Gravesend, Kent, where her cousin Sr Frances Lennon worked, and she stayed there for two years.

But fate intervened, because Maggie came home on holiday and had her head turned by a young man called Stephen Byrne, whom she met at a dance in Kiltegan.

The pair fell madly in love, married in 1960 and went on to have one son and seven daughters when they settled in Tuckmill in Stephen’s home place.

Despite being a busy mother and housewife, Maggie reached out to the older people in the area, sending them Sunday dinners, bringing them shopping and especially bringing them to the day care centre in Baltinglass every Thursday.

One of her greatest achievements was the Lalor Centre in Baltinglass. When she found out that her daughter Bernie had special needs, she also discovered that there were absolutely no services for people like her in West Wicklow or Carlow.

Rather than accepting the situation and letting young children with added needs be uncared for, she tackled the issue head-on with her no-nonsense attitude and practical nature.

With a few like-minded people such as the late Fr Gary Doyle, Seamie Leigh, Christy Lynch of KARE, Mary Keogh and Edie Kennedy, she was the driving force behind those first tentative steps that have led to the brilliant services available today, the pride of which are the Lalor Centre in Baltinglass and St Laserian’s School in Carlow.

When the Kosovo refugees came to Baltinglass from Eastern Europe and were housed in the old convent, she was among the first volunteers to help them settle into life in Baltinglass.

She was also busy in her own house, too, raising her children, and then later, looking after the grandchildren. Maggie and Stephen had given their children the freedom of the farm and the wild Wicklow hills that surrounded them. Maggie made sure to include her children in chores on the farm and, in particular, in the kitchen where, every weekend, the smell of apple tarts baking in the oven would waft across the fields.

At the requiem Mass in St Joseph’s Church, Baltinglass, Maggie’s daughter Stephanie paid tribute to her.

“We had a very happy childhood and over the last few days have been reminiscing on many, many fantastic memories. Some of those include the production line at the kitchen table on a Saturday morning, where apple tarts, flans and lemon meringue pies were made to beat the band, all the shoes were polished and lined up for Sunday Mass, while days were spent picking potatoes in the fields or being sent to the orchard for the apples.

“We loved the Sunday drives and trips to the seaside, where two cars were needed. Uncle Des would be drafted in to take half of us and we’d have salad sandwiches and flasks of tea out of the boot of the car. The magic and excitement of Christmas in a large family was on another level.

“Stevie was the love of her life, and when he passed almost 27 years ago, her heart was broken. They had worked extremely hard on the farm and other jobs on the side to provide for us. They were lovingly supportive to whatever major decisions their children made in their lives and always said ‘just do your best’.

“Stephen’s mother Mary was part of Byrne family for 31 years, while Maggie took in a few strays over the years. Her house had an open-door policy and everyone was welcome.

“Maggie was a very sociable woman and she played a large role in the local community. She had a very strong faith and helped so many people through the day care centre, the church, the Lalor centre, new arrivals in the community, the elderly (a category she didn’t put herself in) and countless other ways.

“She had a kind heart and would leave whatever she was doing at the drop of a hat to help others. She played a huge role in setting up a school and adult services for those with special needs and worked tirelessly at fundraising projects such as an annual auction in aid of the Lalor Centre or even making lamb jackets to keep the little animals warm, but also to raise funds for the Lalor Centre.

“Mam had a great sense of humour and was always up for the craic. She loved dancing, playing cards and visiting friends and neighbours. “At a recent family wedding she played air guitar and drank shots at the bar with her grandchildren. She had a litany of old sayings and would come out with the most random one at any moment and have us all in stitches.

“Her family was her priority. She adored and loved to spoil her 17 grandchildren and more recently her five great-grandchildren. She was the glue that held our family together and life will never be the same without her. We will love you and miss you forever, Mam. Rest in peace, Maggie, your work is done,” Stephanie’s eulogy to her mother concluded to great applause.

Serene and at peace

Around her gathered her family

Appropriately dressed in black as befits our culture

Her sisters there, too, and her in-laws

Her grandchildren young and vibrant with their spouses, partners, friends

Able to smile as embraces and hugs were shared

And then the little people, her great-grandchildren all dressed up, Romping around

Blissfully unaware of the separation and grief around them

The hopes of the future

Then the final prayers in her beloved Tuckmill

Prayers of gratitude and hope

Thoughts of what God was calling her to be.

Good and faithful servant come and take your place in my palace.