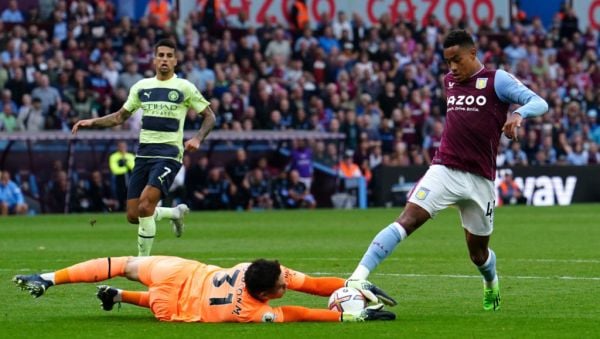 Manchester City missed the chance to move to the top of the Premier League as they were held 1-1 away to Aston Villa.

A late goal from Leon Bailey denied City all three points after Haaland had given the away team the lead.

A huge effort and performance from the lads earns a fully deserved point.

Third-placed Tottenham are also a point behind leaders Arsenal thanks to 2-1 victory at home to Fulham.

Bournemouth came from 2-0 down to win 3-2 at Nottingham Forest.

Everton and Liverpool ended goalless, and it was the same for Crystal Palace at Newcastle.

Elsewhere, Brentford thrashed Leeds 5-2 and Wolves were 1-0 winners over Southampton.

And West Ham were denied a late equaliser as they lost by the same score at Chelsea in another London derby.

Maxwel Cornet’s 90th minute strike was ruled out after a VAR review for a foul in the build-up.

Scottish Premiership champions Celtic extended their lead at the top of the table to five points with a 4-nil thrashing of Old Firm rivals Rangers.

Hearts missed the chance to move up to second as they were beaten 1-nil at Livingston.

There’s one game in the SSE Airtricity League Premier Division this evening, with Sligo Rovers hosting Drogheda United at the Showgrounds.

The action is just underway.

Rafa Nadal plays the experienced Richard Gasquet for a place in the last-16 of the US Open.

British number one Cam Norrie is through the fourth round.

He saw off 28th seed Holger Rune in an impressive straight sets victory in New York.

Dan Evans will hope to join him in the last-16 later. He faces Croatia’s Marin Cilic.

Leona Maguire is in a tie for 2nd place on day three of the Dana Open on the LPGA Tour.

The Cavan woman is five under par playing the last today and has put herself right in contention.

The Solheim Cup star is now 11 under for the week and just one shot off the lead which is being held by American Lucy Li.

Jonathan Caldwell is the best of the Irish after day three of the Made in Himmerland event on the DP World Tour.

The Down man is four under for the tournament after a round of 73 in Denmark this afternoon.