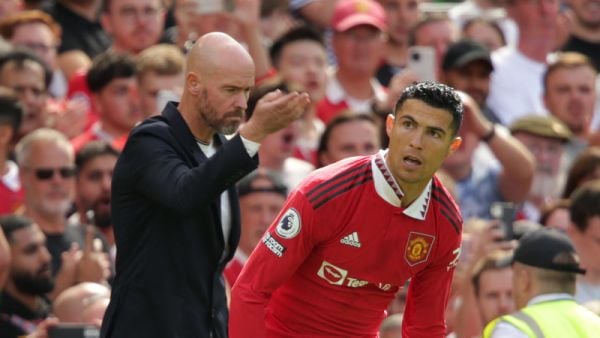 Erik ten Hag is ready to act as both friend and teacher to Cristiano Ronaldo after the Manchester United star’s immediate future was finally put to bed.

The 37-year-old had been keen to call time on his second spell at Old Trafford less than a year after returning from Juventus following a disappointing season for a club he has won medals aplenty with.

Ten Hag and the club repeatedly said throughout the summer that Ronaldo would be staying put and, despite speculation continuing right up until Thursday’s transfer deadline, so it proved.

The star was at the King Power Stadium on Thursday rather than completing a move to a Champions League side, coming off the bench for the third successive game as the Red Devils won 1-0 at Leicester.

“(He stayed), as we said,” Ten Hag said. “It’s really early in the season and we have a squad and we have more than starting 11 players and that is what you see now.

“Players who are now on the bench can play in one, two or three weeks.”

Ronaldo’s lack of pre-season preparation has been the key reason behind the fact he has made just one start so far this season.

He missed the pre-season tour of Thailand and Australia due to a family issue, with his only minutes being the first half of the friendly against Rayo Vallecano.

Ronaldo will be hoping to make his second start in Sunday’s clash against Arsenal and Ten Hag will treat him with the same respect as any other player this season.

“It is a base, especially in the game we play, the way of play. We play another type in comparison with last year.

“It depends on the demands, cooperation and it demands certain positioning, in and out of position, and the other thing is fitness.”

Ronaldo’s long-time Real Madrid team-mate Casemiro could make his first United start on Sunday, when Antony will hope to make his bow after completing his big-money deadline-day move from Ajax.

Eyebrows have been raised at the fee forked out for the 22-year-old, with an initial fee of €95 million potentially increased by further €5 million in add-ons.

Antony joins former Ajax team-mate Lisandro Martinez and ex-Feyenoord left-back Tyrell Malacia in moving from the Eredivisie, where standout players have not always gone on to shine in the Premier League.

“First the players who we signed are internationals for their countries,” former Ajax boss Ten Hag said.

“They performed really well in the Champions League and thirdly looking at their individual skills they are capable of playing high-intensity football, the players we selected and recruited.”

Martinez has made a promising first impression at United, winning their player of the month award for August.

The 24-year-old had been of interest to Sunday’s opponents Arsenal and joined from Ajax for an initial fee of €57.37 million, which could rise by a further €10 million.

“Yes, I wanted him, he’s ball-playing but also you see his defending capabilities,” Ten Hag said.

“His toughness, his positioning, his anticipation and togetherness.

“I know what he is able to do. This is a base. He is doing well but he has to do much better.”