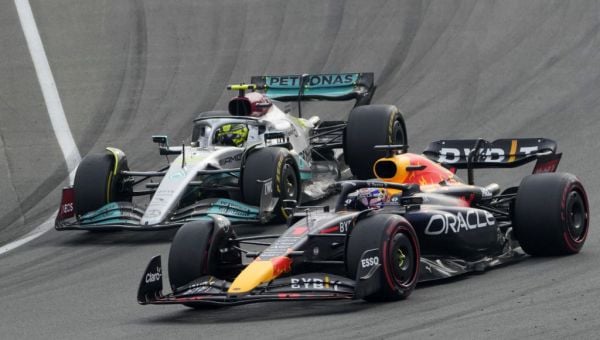 A furious Lewis Hamilton accused his Mercedes team of “f****** screwing” him after a bungled strategy derailed his shot at winning Sunday’s Dutch Grand Prix.

Hamilton was in contention to take his first win of the season – running second to Max Verstappen when Alfa Romeo’s Valtteri Bottas broke down, and the safety car was sent out with 15 laps remaining.

But while Verstappen, and all those around him stopped for the speediest soft tyres, Hamilton was left out on worn medium rubber.

Hamilton assumed the lead, but Mercedes’ curious decision rendered the seven-time world champion a sitting duck – just as in last year’s title decider in Abu Dhabi – when the race resumed on lap 61 of 72.

Verstappen breezed past Hamilton before the first corner, to the delight of his home crowd. The Red Bull driver went on to claim his fourth victory in a row and extend his championship lead over Charles Leclerc to 109 points with seven rounds remaining and 191 points available.

George Russell passed Hamilton for second on lap 64, with Ferrari’s Leclerc knocking Hamilton off the podium the next time around. Hamilton promptly turned the airwaves blue.

“That was the biggest f***-up,” he yelled over the radio.

Hamilton started fourth, but a one-stop tyre strategy looked set to work in his favour only for Verstappen to be handed an effective free stop when Yuki Tsunoda, who drives for Red Bull’s junior team Alpha Tauri, broke down on lap 48 and the Virtual Safety Car was deployed.

However, Hamilton would be handed the chance of a reprieve, but his failure to take on fresh rubber for Sunday’s late shootout cost him dearly.

He crossed the line 13 seconds behind Verstappen as the Dutchman closes in on his second title in as many years.

“It was looking good, but we will sit down and review the decisions we made.”

Toto Wolff added his voice to the list of apologies. “Lewis, sorry it didn’t work out,” the Mercedes team principal said.

“We took a risk. Let’s discuss it between us in the office.”

Verstappen wasted no time getting past Hamilton at the restart 😮#DutchGP #F1 pic.twitter.com/d3muMaULsE

Hamilton came on the radio to express gratitude only to his mechanics, leaving out any mention of his team’s strategy department, headed up by James Vowles.

“To all the mechanics, fantastic job today,” he said. “They were the best pit-stops of the season so thank you for the continued efforts. Let’s keep pushing. We still got points today.”

An hour after the chequered flag fell, Hamilton explained his radio fury.

“I don’t want to apologise for my passion, because that is just how I am made and I don’t always get it right,” he said.

“I am sorry to my team for what I said because it was made in the heat of the moment.

“Of course I am disappointed. It has been such a rollercoaster ride this year. I got up to second, I was catching them (Verstappen) and thinking, ‘Wow, we could be fighting for a win here, and maybe a one-two’.

“And then the safety car came through and fricking emotions were all over the place. I knew at that moment I had lost it because everyone was on the soft tyre and there was no way I was going to hold them behind me.”

We’re getting closer. 👊 Big thanks to the team for continuing to push and to the fans for creating a mega atmosphere. Respect to @LewisHamilton for the performance this weekend too – you deserved to be standing on the podium today. We’ll get that W soon… pic.twitter.com/COUslXL1nD

Russell, now 30 points ahead of Hamilton in the standings, demanded to be changed to the soft rubber, but his team-mate left the ball in Mercedes’ court.

“I didn’t have any discussion with the team,” Hamilton said. “I didn’t think anyone was going to stop.

“But when I pulled past my pit box, and I saw the soft tyres were out, and I saw it was happening to George, my hopes faded.

“I 1,000 per cent believe we have the right team in place. Today wasn’t an easy call, and of course we could look back and say we would have made a different choice but that is not life and you have to learn from it.

“I was hopeful of getting a podium, first or second at least, but we move on.”