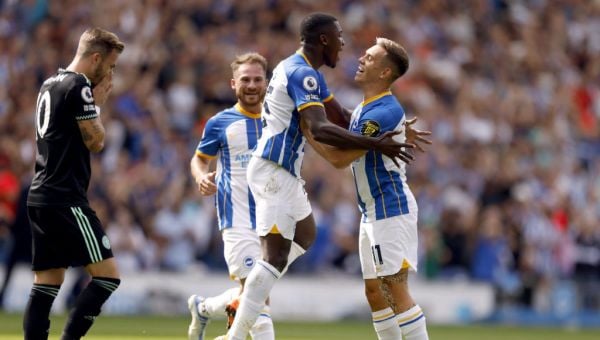 Bottom-of-the-table Leicester failed to ease mounting pressure on manager Brendan Rodgers after their winless start was extended by a thumping 5-2 defeat at high-flying Brighton.

The visitors were level at half-time at the Amex Stadium thanks to Patson Daka after a Luke Thomas own goal and a Moises Caicedo strike overturned Kelechi Iheanacho’s first-minute opener.

But they were outclassed for the duration of the second period and have now taken just one point from a possible 18, leading to a ‘Rodgers Out’ banner being unfurled in the disgruntled away end at full-time.

City would also have lost by a bigger margin had Mac Allister not had a stunning long-range strike ruled out for offside against Enock Mwepu following a lengthy VAR check.

Brighton’s deserved victory tightens their grip on fourth spot as they emphatically responded to suffering a first defeat of the season at Fulham in midweek.

Leicester boss Rodgers this week admitted his club’s primary objective was avoiding relegation following a difficult start to the season and a tough transfer window.

Deadline-day signing Wout Faes was unable to feature in Sussex having not received a visa in time, while Rodgers responded to Thursday’s 1-0 loss to Manchester United by bringing back attacking duo Iheanacho and Daka.

Brighton turn on the style in the Sunday sun ☀️#BHALEI pic.twitter.com/cSkO0OynFW

The away side, who have never finished lower than 12th since their shock title success in 2016, made a dream start just 51 seconds in.

Youri Tielemans dispossessed Solly March on the left flank and, after the ball was helped on by Harvey Barnes, Daka squared it across goal to give Iheanacho a simple tap-in.

Leicester’s travelling fans responded to the rapid opener by ironically chanting ‘we are staying up’ but they were swiftly silenced as the Seagulls turned the game around.

March atoned for his early error in the 10th minute, forcing Foxes defender Thomas to divert the ball into his own net by heading a floated cross from fellow Albion wing-back Trossard back across goal.

Another Leicester mistake led to the Seagulls edging ahead just five minutes later.

James Maddison carelessly conceded possession close to the halfway line, allowing Mwepu to stride forward and slip in Caicedo, who finished emphatically into the bottom-left corner.

Brighton fans taunted Rodgers with chants of ‘you’re getting sacked in the morning’ but, having seemingly been in control, the home side then inexplicitly gifted Leicester a 33rd-minute leveller.

Adam Webster’s sloppy long pass was easily cut out by Barnes and, after the backtracking Lewis Dunk was caught out by Tielemans’ perfectly-weighted ball over the top, Daka raced clear to confidently slot beyond Robert Sanchez.

Brighton began the day with the meanest defence in the division but almost fell behind for a second time when Barnes’ powerful snapshot was repelled by Sanchez just before the break.

But it was all downhill for the Foxes from there.

The Seagulls thought they had regained the lead two minutes after the restart thanks to Mac Allister’s thunderbolt.

Yet, after referee Tony Harrington reviewed footage on the pitch-side monitor, the stunning 25-yard drive into the top-left corner was ruled out.

Brighton’s support used colourful language to vent their frustration but were not to be denied in the 64th minute.

Sustained pressure culminated in Pascal Gross slipping in the lively Trossard and he kept his composure to find the bottom-right corner.

The Seagulls quickly doubled the advantage. Mac Allister made up for his earlier disappointment by coolly converting down the middle from the spot after Trossard tricked his way past Wilfred Ndidi with an outrageous piece of skill before being brought down.

Leicester never threatened a comeback and their misery was compounded deep into added time when Mac Allister bent a delightful free-kick into the top-left corner from range.