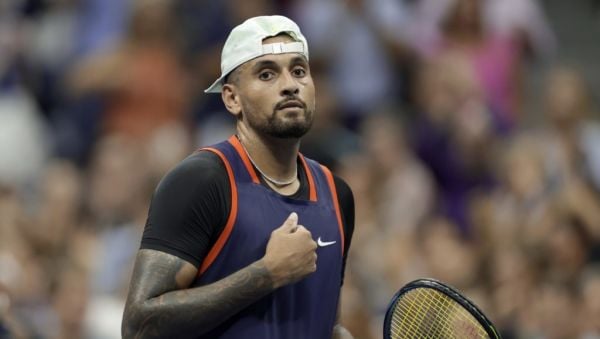 Nick Kyrgios has his eyes on the big prize after a stunning victory over defending champion Daniil Medvedev to continue his brilliant summer by reaching a first US Open quarter-final.

Making the Wimbledon final has wetted the Australian’s appetite for more success on the big stage and he produced a superb display of power and touch to win 7-6 (11) 3-6 6-3 6-2.

Medvedev defeated Novak Djokovic to win his maiden grand slam title in New York 12 months ago but he was beaten by the better player under the lights on Arthur Ashe and will now lose the number one ranking.

Kyrgios has spoken extensively about the influence of his team and wanting to make the months away from Australia count by finally living up to his enormous talent.

“Obviously if you look at it on paper, I probably wasn’t expected to win that. Maybe take a set or two if I’m lucky. Give the people a show.

“It’s a great win. But I come off the court and I’m just almost relieved that it’s over because there’s just so much pressure every time I go out on court, so much expectation, so much unpredictability of what I can do.

“I just sit there in the locker room after and I’m just super proud of the performance because there was really a time where I didn’t think I was capable of producing and doing this any more.

“I just mentally struggled so hard for the first six, seven years of my career. I had great results, shocking results, try really hard, then tanking. I honestly didn’t know how to deal with any of it. I beat myself up way too hard. It was unhealthy.

“I look back, it was just all a learning process to now because I’ve matured so much. I know the process now of what it takes to get to a final of a grand slam. Not to win it yet, but to get to the final.

“It’s the last biggest tournament of the year. We’ve got to try and just tough it out and keep pushing each other, keep being positive. Next week we’re going home. But three more matches potentially, then we never have to play tennis again.”

That last comment may or may not be serious, but what is clear is Kyrgios is a serious title contender if he can maintain the form he showed under the lights.

He went into the contest buoyed by a victory over Medvedev in Montreal last month and drew first blood after an epic opening-set tie-break.

Having led 4-1, Kyrgios slammed his racket to the court as Medvedev levelled at 5-5, but the Russian could not take any of three set points.

Momentum swung towards Kyrgios and, after another slam of his racket at a missed opportunity, he played an ice cool drop shot and then clinched his fourth set point.

The Australian’s focus wavered in the second set but now he knows how to reset and from the start of the third he was locked in, seizing time and again on the Medvedev serve and powering his way to one of the best victories of his career.

Kyrgios was even able to happily shrug off a bizarre moment early in the third set when he appeared to have set up a break point but came round the net post to whack away a ball on Medvedev’s side, thus forfeiting the point.

The Russian revealed afterwards that he was not feeling well, blaming the United States’ love of air conditioning, but credited Kyrgios for his performance.

“It was a high-level match,” said Medvedev. “I’ve played Novak, Rafa. They all play amazing. Nick today played kind of their level, in my opinion. If he plays like this until the end of the tournament, he has all the chances to win it.”

well this was… odd pic.twitter.com/zl94yPmGwL

Rafael Nadal is in pole position to take over as world number one, although Casper Ruud and Carlos Alcaraz are also in contention.

Medvedev said: “I’m not going to cry in the (press) room, but I’m a little bit disappointed. For a few days I’m going to be just a little bit sad, looking at my phone, my laptop or watching some series.

“But that’s motivation, try to do better. Obviously it was the last slam of the year. I didn’t do well enough.”