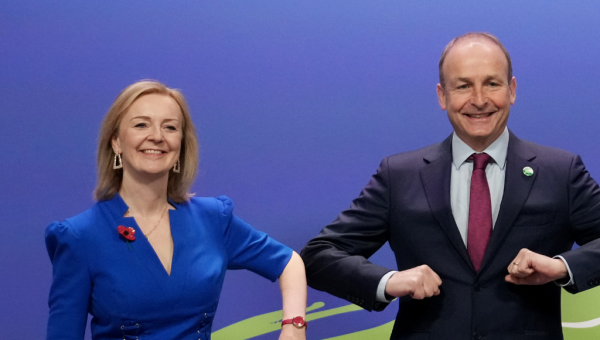 In a tweet, Mr Martin said: “Congratulations [Liz Truss] on your election as Conservative party leader.

“I look forward to working with you, as PM of our nearest neighbour, on important issues we face together, both bilaterally and globally.”

Ms Truss was confirmed as the new Tory leader following a ballot of party members across the UK, beating off former British chancellor Rishi Sunak.

Congratulations @trussliz on your election as Conservative party leader.

I look forward to working with you, as PM of our nearest neighbour, on important issues we face together, both bilaterally and globally.

The commission also made clear it expected Ms Truss to implement the Northern Ireland Protocol in full, insisting the position in Brussels regarding the contentious post-Brexit trading arrangements had not changed “one iota”.

Among the many thorny items in Ms Truss’s in-tray is the ongoing dispute with the EU over the protocol – a set of trading arrangements that have created checks on goods moving into Northern Ireland from Britain.

Congratulations @trussliz. A positive 🇪🇺🇬🇧 relationship is of great strategic importance. I stand ready to work intensively and constructively with my new UK interlocutor to foster such a partnership, in full respect of our agreements.

As Britain’s foreign secretary, Ms Truss angered the EU by tabling domestic legislation at Westminster that would empower British ministers to unilaterally scrap the arrangements that the UK signed up to as part of the Brexit withdrawal agreement.

The European Commission has insisted such a move would breach international law.

During the Tory leadership campaign there was also speculation that Ms Truss may move to suspend the protocol when she enters No 10 – by triggering a mechanism called Article 16.

Many unionists are vehemently opposed to the protocol, claiming the Brexit checks on goods moving across the Irish Sea are undermining Northern Ireland’s place within the UK.

The DUP is currently blocking the formation of a powersharing executive at Stormont in protest at the protocol and the party has called on Ms Truss to maintain her hard line against the controversial arrangements when she becomes prime minister.

Mr Sefcovic, who is the EU’s lead negotiator on the protocol impasse, tweeted: “A positive relationship is of great strategic importance. I stand ready to work intensively and constructively with my new UK interlocutor to foster such a partnership, in full respect of our agreements.”

Congratulations @trussliz.
The EU and the UK are partners.

We face many challenges together, from climate change to Russia’s invasion of Ukraine.

I look forward to a constructive relationship, in full respect of our agreements.

Ms von der Leyen did not specifically refer to the protocol in a tweet of congratulations but said she wanted a “constructive relationship” with Ms Truss “in full respect of our agreements”.

“The EU and the UK are partners,” she wrote.

“We face many challenges together, from climate change to Russia’s invasion of Ukraine.

“I look forward to a constructive relationship, in full respect of our agreements.”

Earlier, Commission spokesman Eric Mamer said Brussels’ position on the protocol had not changed “one iota” and it expected to be honoured in full.

“We are always looking for new beginnings,” he said.

“Obviously, anything that can help move forward in our relationship with the United Kingdom will be very welcome.

“As to what we expect it is very clear, it has not changed one iota: We expect the full implementation of the Withdrawal Agreement, the Trade and Co-operation Agreement we have signed and, of course, the Irish and Northern Irish Protocol.”

On Monday morning, Minister for Foreign Affairs Simon Coveney said Ms Truss could achieve a “sensible compromise” on the protocol if she was prepared to soften her approach on the issue.

Mr Coveney said political leaders in Dublin and Brussels are hopeful Ms Truss will adopt a less strident stance on the protocol when she becomes prime minister.

He expressed hope her premiership could herald a “change in direction” for Irish/UK relations after recent years of tension over Brexit and the protocol.

Referencing the prospect of retaliatory action by the EU if the UK moved to scrap the protocol, Mr Coveney said all sides wanted to avoid a trade war, especially in the current context of soaring inflation and a cost-of-living crisis.

“I think the last thing Britain wants and needs, and certainly Ireland wants and needs – and it’s the same across the EU – is a trade war between the EU and the UK,” he told RTÉ’s Morning Ireland programme.

“That can be avoided. We all know that. There is a deal to be done here through sensible politics and pragmatism, we know what it looks like, in my view. What it takes now is political will to be able to make that happen between a new UK government and a European Commission that is willing to reach out and show flexibility.”

He added: “A lot of the key decision-makers are trying to reach out and give a signal to Liz Truss that if she decides to change course to a more positive one in terms of trying to find a sensible compromise with the EU, that we can find a way forward on this issue.

“And I think Northern Ireland needs that and deserves this. We have so many issues to resolve together. We need to move on from the Northern Ireland Protocol issues and settle them on the basis of sensible compromise.”