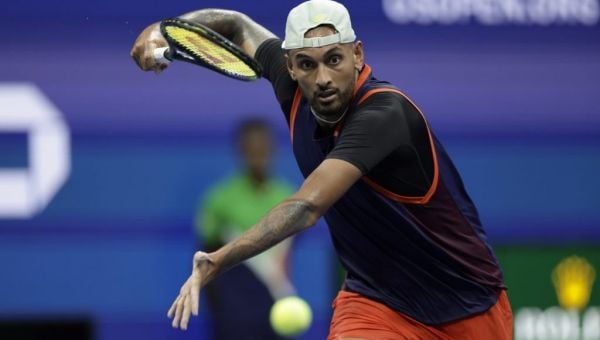 Nick Kyrgios continued his brilliant summer by knocking out defending champion Daniil Medvedev in the fourth round of the US Open.

Medvedev will lose the world number one ranking after the four-set defeat while Kyrgios moves on to a last-eight clash with Karen Khachanov.

Coco Gauff battled past Zhang Shuai in a high-quality match to reach the last eight in New York for the first time and next plays in-form Caroline Garcia.

well this was… odd pic.twitter.com/zl94yPmGwL

Kyrgios is no stranger to self sabotage but this was a particularly ridiculous way to lose a point. By hitting a shot on Medvedev’s side of the net, even though the ball had not gone over the net, Kyrgios forfeited what would have been a break point.

Corentin Moutet getting ready for a fourth set against Casper Ruud (probably).pic.twitter.com/0NUyRZ4vjJ

Cameron Norrie takes on Andrey Rublev in the first match on Louis Armstrong Stadium on Monday as he bids to reach a second successive grand slam quarter-final.

Iga Swiatek, who is looking to make her first US Open quarter-final, plays German Jule Niemeier.