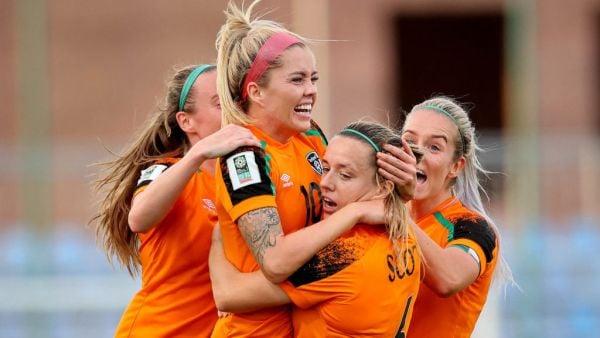 Denise O’Sullivan fired the Republic of Ireland potentially to within one game of the World Cup finals in Australia and New Zealand after they ended Group A with a victory in Slovakia.

O’Sullivan’s first-half finish secured a 1-0 win in Senec to ensure Ireland are one of the three best-ranked sides in October’s play-offs and will go straight through to the second phase as a result.

Vera Pauw’s team had already secured runners-up spot in the group and a play-off berth with victory over Finland last week, but now they could be within 90 minutes of a first ever trip to the finals.

WNT secure a place in the Second Round of the @FIFAWWC Qualifying Play-Off #SVKIRL | #COYGIG | #WeAreOne pic.twitter.com/0y0NEQngKG

Pauw was forced to make changes as she replaced injured duo Megan Connolly and Niamh Fahey and the suspended Jamie Finn with Claire O’Riordan, Harriet Scott and, making her first competitive start after scoring the winner against the Finns, Lily Agg.

The visitors enjoyed the brighter start and although Slovakia skipper Dominika Skorvankova fired wide from distance with 22 minutes gone, Katie McCabe forced Maria Korenciova into a save seconds later.

Jess Ziu broke forward and fed O’Sullivan, who played the ball into the path of Heather Payne before continuing her run to meet the striker’s pull-back and fire right-footed past Korenciova.

In a scrappy second half, McCabe sent a 59th-minute volley just over the angle of bar and post, but chances were few and far between at both ends.

O’Riordan saw a 73rd-minute shot hacked away after McCabe’s dangerous free-kick had been helped on with Ireland attempting to kill off a tight encounter.

However, with the hosts offering little as an attacking force, Ireland remained relatively untroubled at the back and were able to see out victory with few genuine scares.