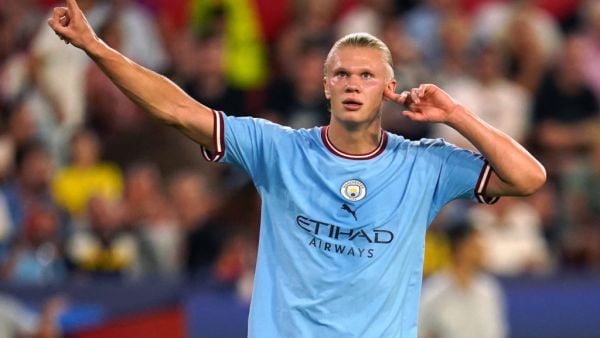 Erling Haaland scored another two goals as Manchester City made a superb start to their latest Champions League quest with a convincing 4-0 win at Sevilla.

The prolific Norwegian maintained his stunning start at City – and his own remarkable record in the competition – by putting the visitors ahead at the Ramon Sanchez Pizjuan Stadium and netting their third.

FULL-TIME | A very impressive start to life in Group G!

The headlines once again belonged to Haaland after a double that took his City tally to 12 in just eight appearances and his overall Champions League haul to 25 in 20 outings.

Sevilla must also be sick of the sight of him after he struck four against them in a two-legged tie for Borussia Dortmund in 2021.

His performance certainly put any defensive concerns City may have had on the back burner.

They were hardly tested after Sevilla boss Julen Lopetegui, under pressure after a dismal start in LaLiga, fielded a conservative side. Former City winger Jesus Navas did make a dangerous run early on but the hosts soon settled in for a damage-limitation exercise.

City threatened as Haaland glanced a header wide, Joao Cancelo had an attempt blocked and Jack Grealish rifled into the side-netting.

Kevin De Bruyne also blasted over twice but soon found his touch to tee up Haaland.

The Belgian was played in by Foden and whipped in a first-time cross from the right which Haaland read perfectly to volley in from close range with 20 minutes gone.

City’s dominance continued with De Bruyne firing a free-kick into the side-netting and Haaland combining with Grealish before shooting at Yassine Bounou from a tight angle.

Sevilla created a chance against the run of play just before the interval as Alejandro Gomez shot over from a Thomas Delaney through-ball and the hosts attempted to start the second half positively.

They pushed City back but the visitors held firm and almost snatched a second as Haaland sent De Bruyne through on goal but Bounou produced a fine low save.

Haaland mistimed a volley and Rodri shot over before City doubled their lead just before the hour with Foden’s well-taken effort.

The visitors broke down the right and Foden showed great composure inside the area to wrong-foot Nemanja Gudelj and guide a left-foot shot into the bottom corner.

Substitute Ilkay Gundogan had an effort disallowed for offside against Foden but Haaland grabbed his second in the 68th minute when he pounced on a rebound after Bounou saved from Foden.

Suso finally registered a shot on target for Sevilla in the 82nd minute but Dias wrapped up an emphatic win for City after Julian Alvarez had an effort cleared off the line in injury time.