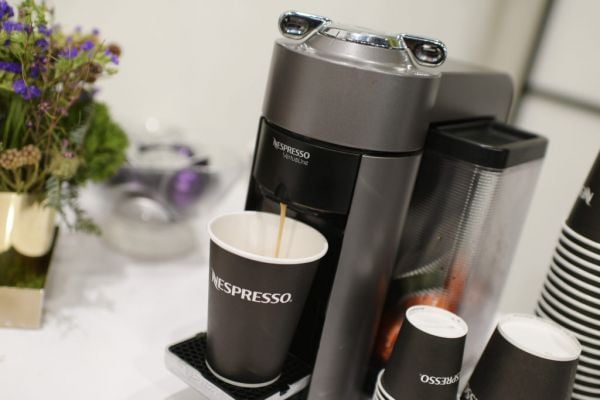 The Nestle-owned company operates a number of boutique outlets here, including a flagship store on Dublin’s Duke Street, with Irish business translating to average weekly revenues of £560,711 (€653,844) last year.

Nespresso’s 2021 sales were boosted by the Covid-19 lockdowns which led to the closure of cafes and restaurants for parts of the year.

The directors also said growth at the company “was boosted by e-commerce and the Virtuo system”, in addition to “a high demand from lockdown consumers and all those working from home, as well as a continued increase in consumer awareness for quality coffee and increased brand awareness for Nespresso”.

Underlining the growth of Nespresso here, last year’s sales of £29.14 million are almost double Nespresso’s sales in Ireland for 2016, which were £14.7 million.

Despite the positives of ‘Covid consumers’, the annual accounts noted that the pandemic continued to be a challenge throughout 2021.

Overall, directors said the company “continues to maintain a strong position and performance financially”, with Irish revenues (£29.15 million) making up 5.8 per cent of Nespresso’s UK and Irish takings of £308.22 million.

Nespresso’s pre-tax profits also increased by 4 per cent to £12.2 million last year, with the company recording a post-tax profit of £9.83 million after paying its corporation tax liability of £2.37 million. The profit takes non-cash depreciation and impairment costs of tangible fixed assets of £13.3 million into account.

The annual accounts also noted that Nespresso’s employee count across Ireland and the UK fell from 783 to 684 last year, with staff costs totalling £31.1 million.