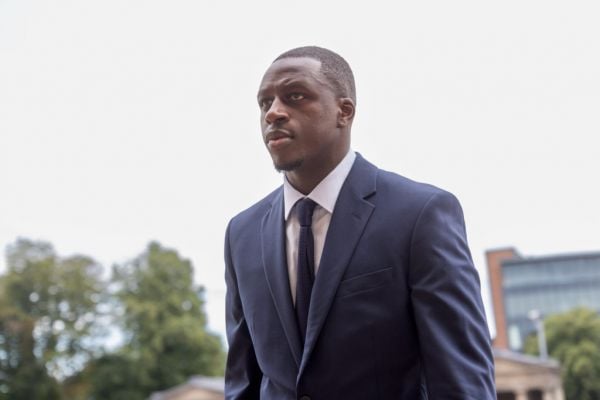 A young woman told a court she went back to Manchester City footballer Benjamin Mendy’s Cheshire mansion despite him allegedly raping her there.

Jurors trying Mendy at Chester Crown Court were also shown footage from a Manchester nightclub showing Mendy dancing on a table, with his trousers half-way down and his top off.

A month earlier the woman, aged 19 at the time, said she was raped by Mendy after visiting the same club, China White, and returning to his home in Mottram St Andrew, near Prestbury.

After spending time in the swimming pool, she went to a top floor bedroom to sleep and said she was awoken by Mendy raping her in the early hours of July 24th, last year.

Under cross-examination, Eleanor Laws QC, defending Mendy, asked the woman: “You find it difficult to explain why you went back, not once, 10 times to a house you say you were raped in?

She replied: “I tried to block this out of my mind and forget about it.”

Ms Laws suggested her account of what happened, waking up to find Mendy raping her, was the “exact same” allegation made by her friend, who the footballer is also accused of raping the same evening.

The witness was shown clips from mobile phones, CCTV footage and photos of her at Mendy’s house on different days after the alleged rape, some of, it was suggested, showing her enjoying herself.

The witness replied: “Honestly, I have no respect for you as a woman to take that off my phone and play it in front of a room full of people.”

Jurors were also shown CCTV from inside China White nightclub, at around 6am on August 23rd, with the woman dancing, wearing a white bikini top and Mendy also present.

This showed, Ms Laws suggested, she was “perfectly comfortable” in his company.

The woman replied: “He was around. I was with my friend.

“That night he was so intoxicated he was falling over tables.”

Another CCTV clip from the night showed Mendy dancing on a table in the club, with his trousers half-way down and his top off.

Ms Laws suggested when in drink people do things they would not normally do when sober.

She added: “You have assumed you can’t have consented?”

The woman said two or three months before the alleged rape, she had sex with Mendy, “like a one-night thing” but that time she was sober and it was consensual.

She was contacted by police as a witness at first, but later made her own allegation against Mendy.

Timothy Cray QC, prosecuting, asked the woman: “Why did you decide to tell in the end?”

She replied: “I just thought it was the right thing to do, not just for myself. I’m not here to lie, I don’t want to put myself through this.”

Mr Cray continued: “What’s being said is, if you had been raped you would not go back to the house?”

She said Mendy was “very rarely” at the house when she was present and she was never alone with him there.

Mr Cray added: “Why did you go back to the house in August?”

She replied: “I just went with friends, just… I don’t know.”

Mendy denies the rape, along with the rape of two other young women over the same 24-hour period at his home.

He also denies five other counts of rape, one attempted rape and a sexual assault, all relating to seven young women, between October 2018 and August last year.

Prosecutors allege Mendy is a “predator” who turned the pursuit of women for sex into a game.

Matturie, Mendy’s friend and fixer, had the job of finding young women for sex, it is alleged.

Both men deny any offences and say if any sex did take place it was consensual.

The trial was adjourned until Wednesday morning.