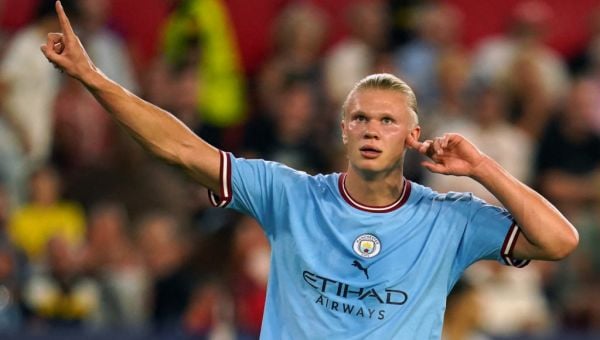 Haaland took his City tally to 12 in just eight appearances with a double that helped the Premier League winners to a 4-0 victory over Sevilla in their Group G opener in Spain on Tuesday.

“It is a born instinct he has carried from the cradle and he has shown in Austria, in Germany and now with us. It is a unique reality of this player. It is a natural instinct to score goals.”

Haaland set City on their way at the Ramon Sanchez Pizjuan Stadium when he slid in to volley in a cross from Kevin De Bruyne in the 20th minute.

He pounced on a rebound for another in the second half after Phil Foden had doubled the lead.

Solid start to the new campaign. Nice away win in Seville 👍 pic.twitter.com/ameEpv6fgw

He had already assured himself of the headlines – yet again – when he was substituted 20 minutes from time but Guardiola was keen to share the praise around.

De Bruyne was named the official player of the match after an influential display.

Guardiola said: “His quality was there for the first goal, in this action, and in the final third. He played a good game and I was happy for him and everyone.”

With defenders John Stones and Kyle Walker ruled out, joining Aymeric Laporte on the sidelines, Guardiola handed a debut to Manuel Akanji and a first start to Sergio Gomez.

Guardiola was particularly pleased with Akanji after the Switzerland centre-back only signed for the club last week.

“We are delighted,” said Guardiola, whose side wrapped up the win with an injury-time effort from Ruben Dias. “He was training just one-and-a-half days with us.

“He showed, like he has at Dortmund, experience in Europe and he’s a really good central defender. He played really well.

“He was always focused and has a quality quite similar to Ayme. He is able to break the lines with the pass and read really well where the spaces are.”

4-0 away from home! Great way to start! Well done the box of toys 💙 pic.twitter.com/FrlchBiGMR

Guardiola said: “Jack arrived incredibly this season, in the pre-season and the first game. Unfortunately he had a little bit of an injury.

“It was important for him to have these 60 minutes. The pitch was uncomfortable, but he was so aggressive in the first half in terms of making the movements.

“Phil lately has not played so good as normal for him, but he always does a job and always runs and fights.

“He is always stable for the team and I am pretty sure the goal and the assist are going to help him.”