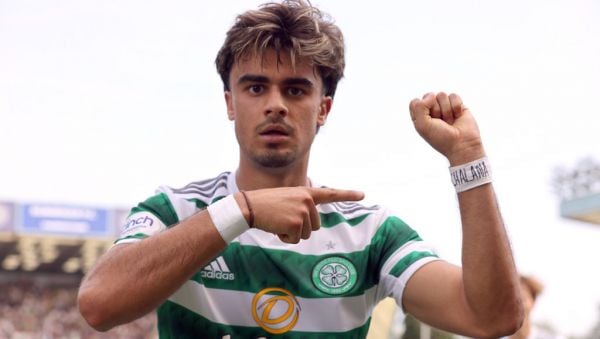 Celtic winger Jota admitted it was a “dream” to compete against Real Madrid but he will focus on improving for the remainder of their Champions League campaign rather than obsessing over how they compare to the holders.

Real head coach Carlo Ancelotti admitted his side struggled in the first half at Celtic Park but the Scottish champions missed a number of chances and ended up losing 3-0.

Liel Abada and Daizen Maeda both had glorious opportunities to open the scoring and Hoops captain Callum McGregor hit the inside of a post before second-half goals from Vinicius Junior, Luka Modric and Eden Hazard saw the Spaniards prevail.

Jota has played for Benfica in the Champions League, twice turning out against RB Leipzig in 2019, but facing the European champions and the likes of Modric and Karim Benzema was a step up.

“This is what dreams are made of,” he said. “When I was young I used to see them on TV and I would say to myself: ‘One day I want to be playing Champions League with these guys and compete against them.’

“It was a very happy day for me and my family because I got the opportunity to do that against some of the best players in the world.

“I don’t want to stop here, I just want to keep improving and improving.

Celtic manager Ange Postecoglou was downbeat after the game and stressed that his players shared his disappointment rather than taking positives from the chances they created.

Jota said: “We work hard every day to deliver results. Unfortunately we couldn’t do that but we also understand the Champions League is a difficult competition. But this is where we want to be.

“We knew we had chances and didn’t score. In the Champions League against teams like this, we know that every chance they get they will take it. This is how football at this level works. We just need to learn from it.

“Every game you can take lessons and this is no different.”

Some of Real’s players enthused about the Celtic Park experience.

Modric called it a “special atmosphere” and thanked Celtic fans for the warm ovation he received when he was substituted. Toni Kroos also labelled the Celtic support “special”.

“The support from the fans from every minute of this game shows that it is amazing. Thanks from the heart to everyone and on our part we just promise everything on the pitch.”

Celtic now face Shakhtar Donetsk in Warsaw next Wednesday. The Ukrainian side are fresh from a 4-1 away win over Leipzig – with the help of a double from former Hoops winger Marian Shved – which swiftly prompted the German club to sack head coach Domenico Tedesco and install former Parkhead full-back Andreas Hinkel as one of their caretakers.

Postecoglou came away from the opening defeat with a resolve to do better.

“I feel determined, not optimistic,” the manager said. “I feel that responsibility, I want us to be a Champions League football club. For that to happen we have to come out next week and be more clinical.