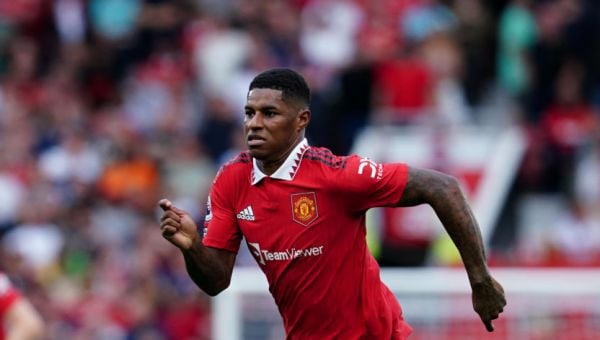 Manchester United manager Erik ten Hag believes the upturn in Marcus Rashford’s form is linked to his personal happiness and says the club remain in control of his future.

The 24-year-old scored twice against Arsenal on Sunday to add to the goal he got in the victory over Liverpool late last month and looks a rejuvenated player from the one who has struggled for the last couple of seasons.

Many observers felt the forward needed to leave the club in order to get out of his rut, but his decision to stay appears to have been vindicated.

His contract runs to next summer, but United retain the option of another year and, when Ten Hag was asked whether the club were talking to him about that, he said: “Definitely.

“I don’t think he’s out of contract (next summer). I think United control the situation.

“I see a happy Marcus Rashford and I see some phases in his game which we could improve and we worked really hard the last two-and-a-half months with him on different aspects.

“He really likes it and wants to transfer it to the pitch and that is what you see in this moment. It started with happiness.

“He comes in every day, he enjoys it, he is really smiling, with a really positive vibe and, if you put all those things together, like the way of playing, you want to transfer different aspects of your game and are happy, you will have more contribution to the team, the performance and the result – and of course to your development.”

Rashford has started all six of United’s matches this season but, despite his improved form, it is likely he will be rested for the Europa League visit of Real Sociedad.

Striker Anthony Martial remains sidelined with an Achilles injury, so Cristiano Ronaldo looks like getting only his second start of the campaign against the Spanish side.

“He (Ronaldo) started against Brentford. Then not since but he is ready to start,” added Ten Hag.

“We not only have a team, we have a squad, that is clear, it’s the mentality what Manchester United need.

“Maybe I cannot keep them all happy every game, but everyone gets their game time if they perform well, (it is) quite clear.

“We need everyone, we have a lot of games to cover, with the internationals, the cups, and Premier League.”

There could also be a first start for Casemiro, a £60million signing from Real Madrid last month who has been been kept out of the side by Scott McTominay.

The Brazil midfielder’s three substitute appearances have amounted to 51 minutes so far and Ten Hag said that was an example of how, despite increased competition within the squad, players kept their places if they performed.

“You can see it like that – when a team is acting well, when players are acting well and we have more than 11 starting players then you stay in,” he said.

“The team is is improving but for players not in the team, they know they can at any moment come in, do the job and maybe do better than the ones who are in then you never know.

“But I know you need more than 11 players to get successful. We have really good players and when they come on they contribute to the success we have now and that is also what we expect.

“I also know the players on the bench will have games as a starting XI player.”