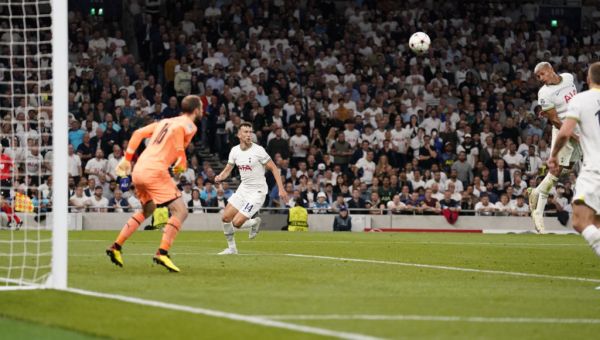 Richarlison’s first goals for Tottenham saw them mark their Champions League return with a 2-0 win over 10-man Marseille.

The summer signing scored two headers in the space of five second-half minutes to get Spurs out of trouble in their Group D opener.

Playing at the elite level for the first time since 2020, Antonio Conte’s men were labouring against the Ligue 1 side, who had Chancel Mbemba sent off early in the second half.

But Richarlison, making his Champions League debut, opened his account for the club in the 76th minute from Ivan Perisic’s cross and then repeated the trick to kill the game from a Pierre-Emile Hojbjerg delivery.

His double ensured Spurs got their campaign off to a winning start in an otherwise largely difficult round of action for British teams.

Following their appearance in the 2019 final, Spurs had been banished to the backwaters of European football, with a Europa League campaign followed by an inauspicious group-stage exit from the inaugural Europa Conference League last season.

Conte had taken them back to the big time, but their first-half performance was hardly befitting of the premier club competition.

Spurs were sloppy in possession and lacked creativity in a drab opening 45 minutes.

Marseille, who were also in the Conference League last season and had former midfielder Joey Barton supporting them in the away end, were hardly of the calibre of their 1993 side that won this competition, but pressed hard and stifled the front three of Harry Kane, Son Heung-min and Richarlison.

It was not until the 40th minute that the trio were all able to combine and it ended in Kane having a rare sight of goal.

Some clever footwork by Richarlison saw him play Son in and the South Korean fed Kane, but he rolled his shot well wide of the far post.

Matteo Guendouzi, constantly reminded of his past allegiance to Arsenal by home fans, had run the midfield for the French side and he forced Hugo Lloris into a smart stop with a low drive just before the break as Spurs were booed off at half-time.

The hosts were given a tonic two minutes after the restart as the French side were reduced to 10 men.

Kane sent Son clear and after getting to the ball first, he was scythed down by Mbemba, who was shown a straight red card by referee Slavko Vincic.

The decision actually worked against Spurs as Marseille changed to a more defensive formation and sat behind the ball, putting the onus on Conte’s side to try and break them down.

The introduction of Dejan Kulusevski helped as the Swede embarked on a dynamic run down the right which ended in his shot being saved by former Spurs loanee Pau Lopez.

It looked like being a frustrating evening until Richarlison chose a great moment to break his Spurs duck in the 76th minute.

Perisic found space down the left and sent in a delightful cross for the former Everton forward to plant a header into the back of the net.

He got his second five minutes later as Hojbjerg’s cross from a recycled corner was despatched in off the post to give Spurs a first win in this competition since they beat Olympiacos 4-2 in Jose Mourinho’s first home game back in November 2019.