Carlow parents at their wits’ end over school bus fiasco 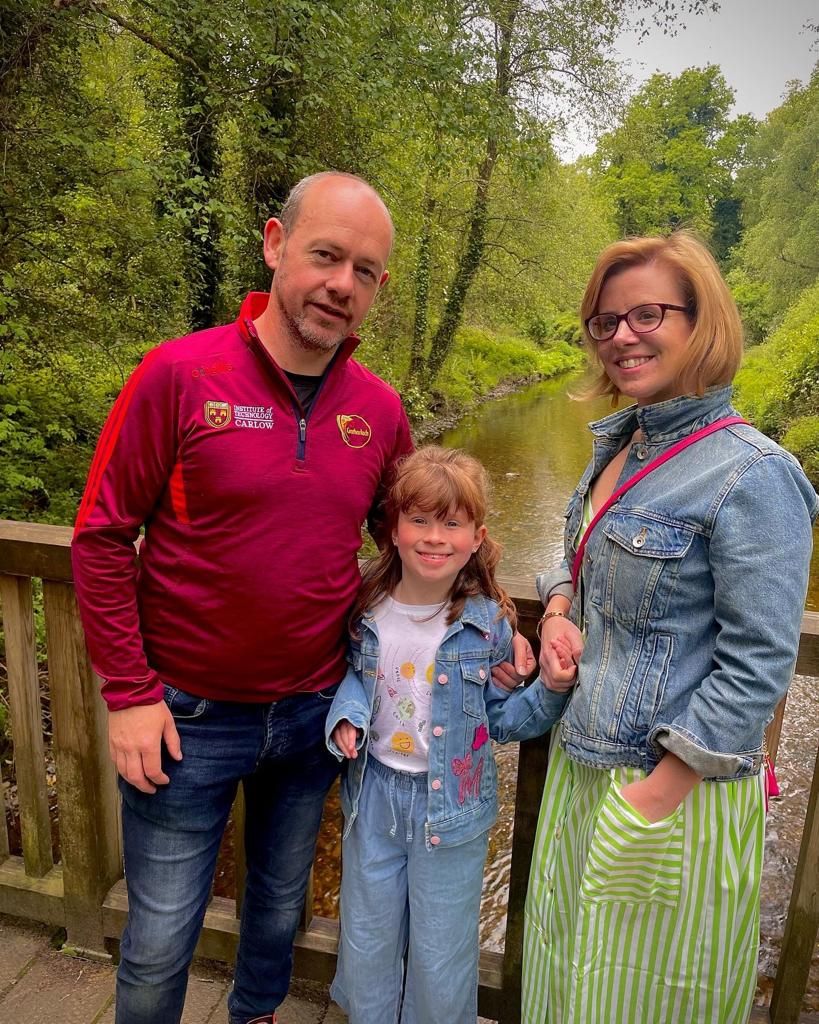 Eimear Ní Bhraonáin with her daugther Roise and partner Alan O’Reilly. Their nearest bus stop for school transport is nearly 7km from their home and as a result they have had to make alternative arrangements

This year’s scheme is the first to provide free transport for primary and post-primary schools, but the service operated by Bus Éireann on behalf of the Department of Education has been unable to match demand.

It led to a host of issues last week, including a Carlow child sitting on the floor of a school bus because there were not enough seats. The child’s mother told ***The Nationalist***: “I couldn’t believe it. Why wasn’t I phoned or the child brought back into the secretary to phone someone. I was absolutely furious that it happened in this day and age.”

The woman, who did not wish to be named, believes a second bus should have been drafted in, as happened later in the week.

“It’s illegal to have them sit on the floor of the bus. Health and safety should have come first,” she said.

In a statement to ***The Nationalist***, Bus Éireann said the safety of children was its ‘number one priority’ and it had ‘robust safety regimes in vehicle compliance checks and driver-vetting procedures’.

Other issues raised by parents include primary school children who finished at 2.30pm not making it home until 4pm due to how some routes are planned.

Families who have not secured seats they badly need for their children also face tough decisions in dropping off and picking up their children. Some have missed out due to very strict criteria and are only being offered concessionary tickets, where they will get a spot if a seat becomes available.

One family to receive a concessionary ticket is Pauline Byrne’s, who live in Ballymurphy. Her daughter Grace is a first year in Borris Vocational School. The school transport scheme is eligible for those who live 4.8km or more from their school. However, their home is .1 of a kilometre under the limit.

“We are just at the point where we don’t get a ticket. If the house was at the end of the garden we’d automatically get one,” said Pauline.

Pauline works in childcare in Kilkenny. She would now have to juggle between friends and family to pick up her daughter on certain days.

“It’s a bit of a nightmare trying to drop her off and get into work on time,” she said.

“That other school has no bus,” said the mother, who did not wish to be named. “There is no stop nearby.”

For much of the summer, the mother thought she had secured a ticket, but on 14 August she received an email, which stated that her child only qualified for a concessionary ticket.

“I am stuck behind the school bus in the morning,” she said. “I am meeting the school bus coming out. I don’t want to be on the road and blocking up the main street of Borris either.”

The woman, along with others who spoke to ***The Nationalist***, said she found it difficult to get hold of anyone in Bus Éireann to get clear answers.

Even for those who have secured seats, there are obstacles. Eimear Ní Bhraonáin, broadcaster and journalist with KCLR FM, said her child faced an almost 7km trip from their home in Tankardstown to Tullow to get to a bus stop. As a result, they had to make other arrangements.

Eimear’s daughter Roise (8), along with three other children in the area, attend the Gaelscoil in Carlow. All four had received tickets, as they are entitled to travel to their nearest Irish language school.

“The presumption would be they’d be getting a bus stop nearby, but the nearest one is in Tullow at Aldi, which is nearly 7km from where we are. It’s a really busy route. You wouldn’t send a child out on it to get the bus,” said Eimear.

According to the Citizens’ Information service, routes are planned so pupils don’t have to travel more than 2.4km to the nearest pick-up point.

Eimear added: “We are being told to cut back on our car journeys. The children have bus tickets and want to use the bus. We would be willing to pay for the bus service, even though it’s free, but we can’t use it as it’s 7km away.”

Eimear had made concerted efforts to resolve the issue during the summer, but was told the routes would not be revisited this side of Christmas.

Carlow county councillor Tommy Kinsella was making representations for several families who had only received concessionary tickets. Speaking of the decision to introduce free school bus transport, cllr Kinsella said: “It was a political decision and it must be sorted by the politicians. We have four TDs in government. Free tickets were issued, but not a lot of thought was put into it.”

In a statement, Bus Éireann apologised for the inconvenience caused to families waiting to secure a seat.

‘Regrettably, the unprecedented numbers of new applications for the upcoming school year has led to some delays in issuing tickets. The normal eligibility criteria of the scheme still apply. Tickets continue to be allocated to families as we work through these remaining applications and families will be contacted as further information is available. We apologise for any inconvenience caused by these delays and thank our customers for their patience as we continue to work through remaining applications.’

Bus Éireann said there had been an ‘unprecedented demand’ for the school transport scheme this year and it had issued over 121,000 tickets nationally.

Bus Éireann said they had secured 272 additional school transport vehicle, while additional call staff had been recruited to deal with a ‘large volume of calls’.

Regarding the Tullow bus stop, Bus Éireann said parents should contact their local school transport team to investigate the matter.

‘Parents/guardians are responsible for ensuring that children are brought safely to and collected from pick-up and set-down points,’ the statement concluded.