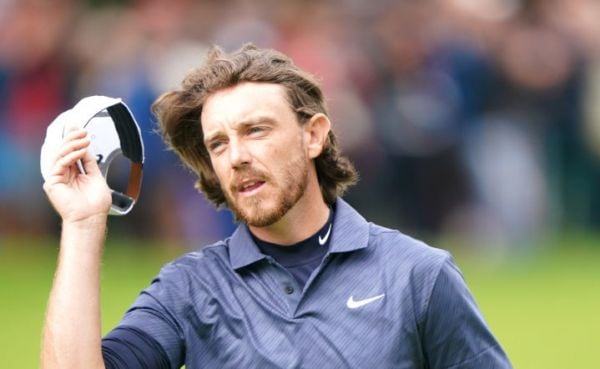 Tommy Fleetwood shook off seven weeks of rust in style to set the pace in the first round of the BMW PGA Championship.

Fleetwood carded eight birdies in a flawless opening 64 at Wentworth, the Ryder Cup star covering his last seven holes in six under to lead by one from fellow Englishman Matthew Jordan.

Former Open champion Shane Lowry, who was in the same group as Fleetwood, is two shots off the lead following a bogey-free 66, while Rory McIlroy and defending champion Billy Horschel both shot 68 despite heavy rain showers making conditions difficult.

“It’s nice to be back more than anything,”  said Fleetwood, who has not played since finishing fourth in the Open at St Andrews as he spent time with his family following the death of his mother.

“Seven weeks off feels more like two years I guess. When you stand on the first tee, you don’t know what to expect, no matter how well you might have been practising or playing.

“It was a lovely grouping to come back to, best friends on Tour (Justin Rose was the third member). It’s always better that I played good rather than bad, but it was just nice to be back.”

Jordan had earlier carded nine birdies and two bogeys in his 65, which started at 6.50am following an unwelcome early alarm.

“It started with a four, but it was so early I can’t even remember exactly when it was,” the 26-year-old joked. “I’m staying with my girlfriend this week and she literally looked at me, moaned, told me to turn it off and then rolled over.”

Jordan, who finished fourth in Denmark on Sunday after heading into the final round a shot off the lead, added: “I’m delighted with the round.

“I’ve been playing well so there was a little bit of expectation from myself and so to go out and shoot a score like that, especially in this event, is very pleasing.”

McIlroy got off to a slow start with four straight pars but birdied the fifth and sixth before dropping a shot on the eighth after only being able to move his ball a few feet from heavy rough.

The FedEx Cup champion was able to see the funny side and said: “I was very surprised. I thought if I could get enough speed into it and get steep enough on it I could at least get it over the water and somewhere around the green.

“Harry (Diamond, his caddie) did say to me, ‘Are you not worried about this bank in front of you?’ and I said, ‘No, I can get over that’. I managed to get away with a bogey and I thought I played okay.

“The rain was on and off all day and that made it a little tricky, umbrellas up, umbrellas down, wet gear on, wet gear off. But the course is soft, so receptive. It’s target practice out there.

“If you can hit the ball in the fairway, you’ve got the ball in your hand with preferred lies so you can go low. I definitely feel the course is going to be very gettable for the rest of the week.”