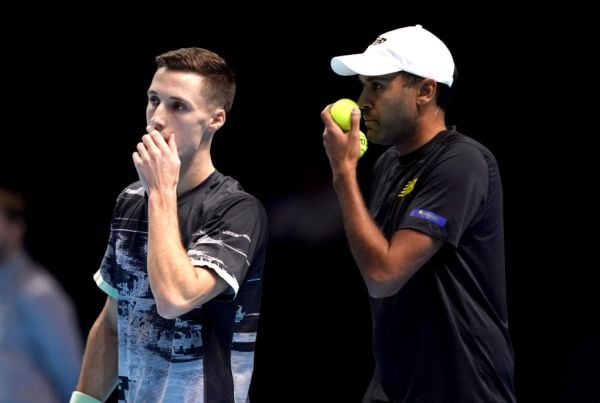 Britain’s Joe Salisbury and American Rajeev Ram are one win away from successfully defending their US Open men’s doubles title after victory over Juan Sebastian Cabal and Robert Farah.

In a close and at times feisty match, Salisbury and Ram prevailed in a deciding tie-break, winning 7-5 4-6 7-6 (5) to move to within one victory of a third grand slam title together.

New York, and especially the area of Queens where Flushing Meadows is sited, has a large South American population and Colombian fans were out in force to cheer on Cabal and Farah.

Louis Armstrong Stadium was far from full but there was plenty of noise, which at times irked Salisbury and Ram, with Cabal in particular doing his best to whip up their supporters.

Top seeds Ram and Salisbury won the opening set but an early break set the Colombians on their way in the second.

Salisbury and Ram looked in big trouble when the Londoner pushed a forehand volley long to drop serve at 5-5 in the decider but he made amends with two excellent lobs to break straight back.

The tie-break was close but Salisbury and Ram were rock solid, holding onto an early advantage to reach their first grand slam final of the season and extend their winning run in New York to 11 matches.