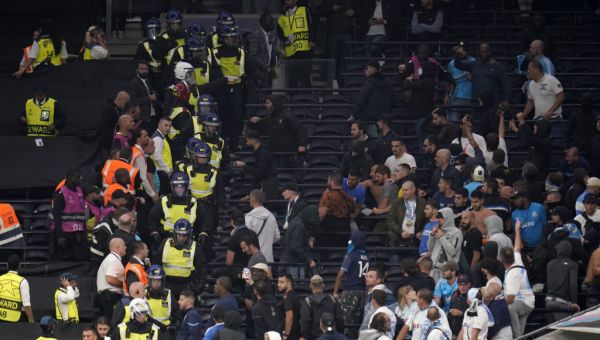 The Metropolitan Police made five arrests after crowd trouble at the end of Tottenham’s Champions League win over Marseille on Wednesday.

Visiting fans were seen throwing fireworks into home areas of the Tottenham Hotspur Stadium at the end of Spurs’ 2-0 victory, with riot police sent in to maintain order.

Five arrests were made, all thought to be Marseille fans, while one officer suffered a suspected broken hand.

A Met statement read: “Five people have been arrested at the Champions League match between Tottenham Hotspur FC and Marseille FC on Wednesday, 7 September.

“The arrests were for a variety of offences including possessing an offensive weapon, affray, drunk and disorderly and drugs; all those arrested are believed to be away supporters.

“During the match missiles were thrown on several occasions.

“One officer was injured during an arrest and suffered a suspected broken hand.

Joey Barton is amongst the travelling Marseille fans at the Tottenham Hotspur Stadium.#UCL pic.twitter.com/W7anogHCz1

“There was serious disorder at the end of the fixture and additional officers were deployed to restore and maintain order.”

Former Marseille midfielder and current Bristol Rovers boss Joey Barton was in the away end during the match, but there is no suggestion he was involved in any of the trouble.

UEFA is set to open disciplinary proceedings once it receives a report on the incident.

A statement from the Tottenham Hotspur Supporters Trust read: “Like all Spurs fans we were extremely concerned by the disorder in and around the away end at last night’s game against Olympique de Marseille.

There are serious questions about how this was able to occur, the preparations and precautions taken and the response by stewards and police inside and outside the ground. Incidents like this should not occur and raise significant issues which require answers and must be addressed.

“We have raised these issues and are seeking a detailed response from the club and the Metropolitan Police.

“Specifically, we have asked about policing, checks on fireworks/flares, segregation in the stadium, stewarding and the police response once disorder started.

“This includes a failure to respond to incidents and the concerns raised, failure of the police to take action on Olympique de Marseille fans’ disorder outside the ground and the level and effectiveness of the stewarding.”