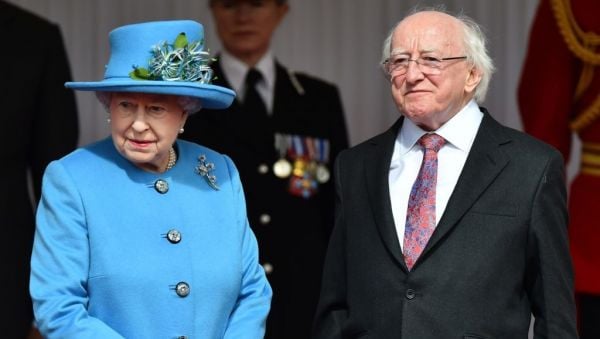 President Michael D Higgins and Taoiseach Micheál Martin have paid tribute to Britain’s Queen Elizabeth upon her death at the age of 96.

In a statement, Buckingham Palace said: “The Queen died peacefully at Balmoral this afternoon. The King and the Queen Consort will remain at Balmoral this evening and will return to London tomorrow.”

The queen’s son Prince Charles is now King, having acceded to the throne immediately on the death of his mother.

In a statement, the Taoiseach said: “On behalf of the Government of Ireland, I would like to convey my deepest sympathy to His Majesty King Charles, the Royal Family, the UK Government and the British people on the loss of their beloved monarch, Her Majesty Queen Elizabeth.

“The Queen’s reign was one of historic duration, immense consequence and a focus of respect and admiration around the world. Her dedication to duty and public service were self-evident and her wisdom and experience truly unique.”

He said the queen’s passing was “the end of an era”.

“To her grieving family and people, the Irish Government join with you in mourning the loss of an exceptional woman who led by quiet and dignified example and who touched so many lives over her exceptionally long reign.

“Our world is a poorer place for her passing but a far richer and better place as a result of her long life and enduring contribution.”

In a statement, President Higgins expressed his “profound regret and a deep personal sadness” at the death of the queen.

“On behalf of the people of Ireland, may I express my heartfelt sympathy to His Majesty King Charles and to the Royal Family on their very great personal loss.

“May I offer my deepest condolences to the British people and to the members of the Commonwealth on the loss of a unique, committed and deeply respected Head of State.”

Mr Higgins continued: “Her Majesty served the British people with exceptional dignity. Her personal commitment to her role and extraordinary sense of duty were the hallmarks of her period as Queen, which will hold a unique place in British history.

“Her reign of 70 years encompassed periods of enormous change, during which she represented a remarkable source of reassurance to the British people.

“This was a reassurance based on a realism of the significance of present events, rather than any narrow conception of history.

“This was so well-reflected by a remarkable generosity of spirit which helped to foster a more inclusive relationship both with the British people themselves and with those with whom her country has experienced a complex, and often difficult, history.”

“As we offer our condolences to all our neighbours in the United Kingdom, following the loss of a remarkable friend of Ireland, we remember the role Queen Elizabeth played in celebrating the warm and enduring friendship, and her great impact on the bonds of mutual understanding, between our two peoples.

“She will be deeply missed.”

Sinn Féin leader Mary Lou McDonald also extended her sympathies to the queen and her family, commending her “contribution to change, peace and reconciliation in Ireland”.

“I wish to extend deepest sympathy to the British Royal Family on the death of Queen Elizabeth II. Her passing marks the end of an era.

“Relationships between our two countries for so long marked by conflict and suffering have been recast and reimagined through the Good Friday Agreement. The Queen proved a powerful advocate and ally of those who believe in peace and reconciliation.

“I salute her contribution to the huge change that has evolved in recent years.

“Her death is a moment of heartbreak and pride for the British people. To them, and especially to Irish unionists, I extend on behalf of Sinn Féin and Irish Republicans sincere condolences. Ar dheis Dé go raibh a hanam dilis.”

We didn’t realise it at the time, but her visit to Ireland was a new beginning in relations between Ireland and the UK.

May she Rest in Peace, and may her successors help to continue the long and ongoing work of reconciliation between Ireland and the UK.

Following news of the queen’s death, Tánaiste Leo Varadkar tweeted he was “honoured” to have met her during her visit to Ireland in 2011.

“I will always recall her warmth, her grace, and most especially her humour,” Mr Varadkar said.

“We didn’t realise it at the time, but her visit to Ireland was a new beginning in relations between Ireland and the UK.

“May she Rest in Peace, and may her successors help to continue the long and ongoing work of reconciliation between Ireland and the UK.”

In the North, DUP leader Sir Jeffrey Donaldson said the queen had been a “steadfast and unshakeable head of state”.

“Her gracious approach has been a constant throughout our lives. Today we mourn Her Majesty’s death, but we do so with tremendous honour for one who served God and her people faithfully.

“Her Majesty led by example in Northern Ireland and reached out the hand of friendship to help with the reconciliation process. We are duty-bound to build on that foundation,” Mr Donaldson said.

He described her visit to the Republic as “ground-breaking”, adding that her visit to his constituency in Royal Hillsborough invokes “precious memories”.

Her Majesty led by example in Northern Ireland and reached out the hand of friendship to help with the reconciliation process.

She tweeted: “The British people will miss the leadership she gave as monarch. I would like to offer my sincere sympathies and condolences to her children, and wider family as they come to terms with their grief.

“I wish to especially acknowledge the profound sorrow of our neighbours from within the unionist community who will feel her loss deeply.

“Personally, I am grateful for Queen Elizabeth’s significant contribution and determined efforts to advancing peace and reconciliation.”

“They are mourning a much-loved mother, grandmother and great-grandmother,” she said.

“But while they have lost a matriarch, the entire country and indeed Commonwealth has lost a person who has been a figurehead and leader for 70 years. Her loss will be keenly felt by many.”

Ulster Unionist leader Doug Beattie said it was one of the saddest days the UK had ever known.

He said: “Without realising it, we have lived through a second Elizabethan Age, a reign which has encompassed massive political, social and economic change, the decline of empire, moon landings, Cold War, the decline of the old heavy industries and the growth of the internet and 15 prime ministers.

“Through it all she remained a constant and reassuring presence in the lives of the people of the United Kingdom providing both stability and continuity, and the sense of loss today is profound.”

SDLP Leader Colum Eastwood said: “My thoughts and the thoughts of all those in the SDLP are with Queen Elizabeth’s family at an extraordinarily difficult time.

“The blessing of a long life does not make the burden of saying goodbye any lighter.

“I also want to extend my deep condolences to all those, across the world, but particularly in Northern Ireland for whom the Queen held a cherished place in their lives and their hearts.”

TUV leader Jim Allister said: “To the nation and almost everyone alive she has been an intrinsic part of our lives.

“Her steady leadership and devotion to duty have hallmarked a reign of unparalleled success.

“Adjusting to life without Her Majesty will be a major national challenge.”