Carlow GAA to assess its needs for a new Operations Manager

CARLOW GAA is in no rush to fill the position of Operations Manager after Ronan Dempsey recently stepped down from the role and returned to teaching.

The Palatine clubman had been in the position for eight years and was involved in many major projects which helped Carlow GAA move with the times. He was involved with the Football Forum which brought club representatives and other interested parties together in an effort to improve the fortunes of football  in Carlow both at club and intercounty level. 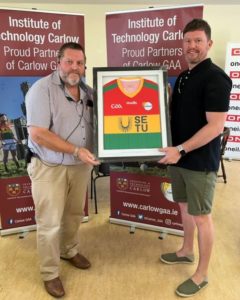 He was also to the forefront in the introduction of the Carlow Colts Coaching program and more recently he helped facilitate the amalgamation of St Andrews, Erins Own and Muinebheag which formed the new Bagenalstown Gaels club.

Jim Bolger, the County Board Chairman, said they will take the softly, softly approach and said he is not sure what way they are going to fill a new role.

“We are looking at what our needs are in that regards. We might go for a slightly different model than we have at present. That will be in keeping with the views of HR and at Croke Park level.

“We will be looking at what models are most suitable for us. We are analysing what our needs are at present. Not alone for the present but strategically for the future. If we are looking at a replacement we have to look at what is going to service us best for the short, medium and long-term,” said the County Board Chairman who paid tribute to Dempsey and in particular, singled out the work the Operations Manager did to help the Bagenalstown clubs to go forward and complete their amalgamation process.

“We would like to thank him and acknowledge his service to Carlow GAA over his eight years in the position. We wish him the best for the future.

“He did a good job and the Bagenalstown club were very happy with the way he facilitated the process,” said Bolger.