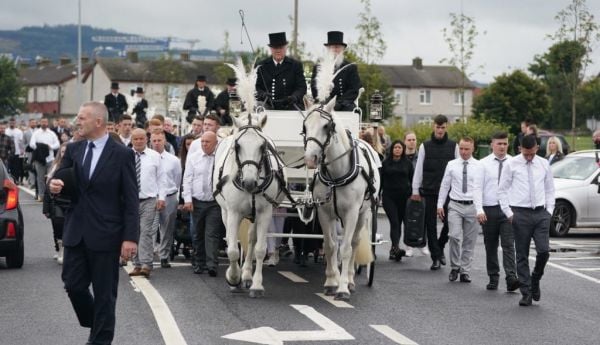 The funeral of three siblings who were killed in a violent attack at their home has taken place in Dublin.

Lisa Cash (18) and her eight-year-old twin brother and sister Christy and Chelsea Cawley died in the incident in Tallaght in the early hours of Sunday.

Following the funeral mass at St Aidan’s Church in Brookfield, Tallaght, the three siblings were taken on horse-drawn carriage for burial at Bohernabreena Cemetery.

Hundreds of people attended the requiem mass on Friday morning.

In the homily delivered by Father Paul O’Driscoll, he quoted writers who said: “When the unexpected happens during a communal crisis, we are not alone.

“We are with friends and neighbours and we all experience the same break in reality. Bereft of words, all of us hold the same question: How could this be happening?”

He said the actions of the siblings’ brother Mikey (14), who was treated for injuries after the incident, was an “inspiration to courage and love”.

In quotes read out from Archbishop Dermot Farrell, he said: “It is difficult to find words to express our shock at the tragedy that has befallen the Cash and Cawley families in recent days.

“May you be consoled in these pain-filled days and may those around you be a source of shelter and strength in the weeks and months to come. May the Lord grant Lisa, Christy and Chelsea eternal rest.”

The siblings died at their home on Rossfield Avenue in Tallaght in the early hours of Sunday.

Their older brother Andy Cash (24), of the same address, appeared in court earlier in the week charged with their murders.

A large crowd of mourners had gathered at the church on Thursday evening as the sisters’ and brother’s remains were carried in.

“Lisa, Chelsea and Christy will be forever loved and very sadly missed by their heartbroken family, grandparents Martin McDonagh, Martin and Mag, aunts, uncles, cousins, brother-in-law Michael, nephew Baby David, extended family and all their many friends,” the notice read.