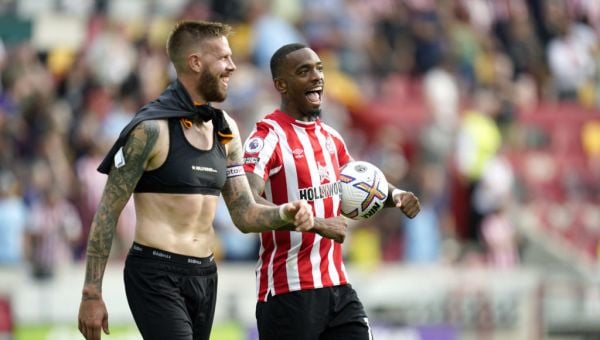 Brentford manager Thomas Frank has been impressed with Ivan Toney’s focus this week despite growing talk over a maiden England call-up.

The forward struck a hat-trick in Saturday’s 5-2 win over Leeds to further press home his claims to be included in Gareth Southgate’s squad for the internationals against Italy and Germany later this month.

Frank insisted there has been no change to how Toney has prepared for this weekend’s potential trip to Southampton and reiterated his belief that the five-goal hitman is currently England’s best back-up option behind Harry Kane.

“Obviously Ivan would be delighted if he gets a call-up and he would love to play for England, I know that for a fact. We hope for it but that is one of his strengths; that he is consistent in everything he does.

“He was obviously magnificent in every aspect of the (Leeds) game. Three different goals but all three taken with top quality, so I really do hope he gets that call-up.

“I think it would be well deserved but again it is Gareth’s job to pick the best players for England and he has done a very good job so far in doing that. In-form strikers? He must be the best behind Kane right now.”

Roma attacker Tammy Abraham and Kane were the only recognised centre forwards in Southgate’s squad for the summer Nations League contests.

With Dominic Calvert-Lewin and Callum Wilson continuing to struggle with injuries while Ollie Watkins is out of form, a window appears to have opened for Toney – even if he potentially faces competition in the form of Manchester United duo Jadon Sancho and Marcus Rashford.

A hat-trick for the Brentford forward against Norwich in March saw his name mooted as an option for the Three Lions but at the time his manager said he had “another level” to reach.

Quizzed on whether Toney was now there with five goals and two assists during his opening six matches, Frank admitted: “In many ways, yeah.

“In all the games we have played he has been a major threat throughout, coming on the end of chances, setting people up for chances, linking up well with team-mates, pressing, a presence in both boxes on set-pieces and just his character and mentality.

“We all know it is about layers; getting on the end of more chances, more involved in link-up play and when you have the situations your pass is perfect to your team-mates, but I think yes, those layers are there so far.”