A birdie on the par five 18th clinched the Ireland Open Series of Golf event for Damien Mooney at Carlow Golf Club on Wednesday. His two round total over two days, a fighting three under par 137, saw him finish a shot ahead of Tim Rice from Limerick while Sean O’Donoghue of Mount Wolseley and Richard Kilpatrick of Banbridge took third alongside Sean O’Donoghue of Mount Wolseley. 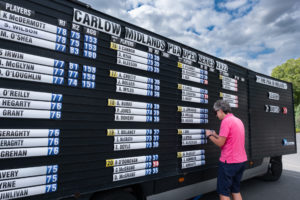 Mooney, who plays out of Lough Erne came from two shots behind Cormac Smyth on round one to emerge victorious.

The PGA Series is open to all PGA Members in the UK, Ireland and overseas. The series involves seven 36-hole tournaments in the various PGA regions in Great Britain and Ireland with each event carrying a prize fund of £20,000 per region.

The seven tournaments provide PGA members with access to top level competition in their own region.

Mooney was delighted to win in Carlow and was fulsome in his praise of the Deerpark venue.

“I have been playing very steady. The course is in fabulous condition. The greens are lovely. If you can read the greens you can hole the putts. There are some very subtle breaks in them. I have really enjoyed  the event,” he said. 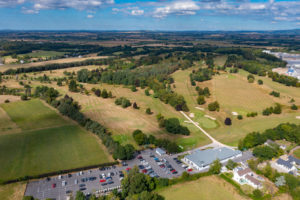 The Carlow Golf Club was the venue for the PGA (UK and Ireland) Open Series. Photo: michaelorourkephotography.ie

A change of putter shortly before the week yielded dividends for the winner.

“I won the first pro-am but I faded away for a while. The putting has been an issue for me. I put a wee putter in the bag  and holed a good few today. Holing out from three feet is the big thing. I played the par threes well. If you play the par 3s well, birdie the par 5s, the par 4s look after themselves,” he recounted.

Over the two days, he never faced any real crisis. His short game was in good nick.

“I pitched in for a 2 on the third out of a bunker. I missed the green on the left and pitched in.

I birdied the last but it doesn’t play very long. I used a six-iron for my second. I made a nice 2 on the 13th when hitting a lovely 7-iron to six feet.”

No doubt, club members who have always found the 16th to be a particularly tough hole, will be interested to hear that Mooney bogied the Index 2 for men on both days.

“I under-clubbed  both days as I was afraid of going over the back and then under-hit my putt both days.”

Apart from that, Mooney was relaxed and played well.

“I would be fairly steady. I was rarely in trouble. I birdied the first on the first day and played nicely after that. I was two under until that bogey on the 16th. 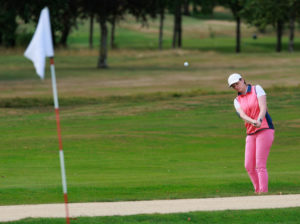 Local golfer and the only woman in the field Tara Delaney chips to the green during the PGA (UK and Ireland) Open Series at Carlow Golf Club. Photo: michaelorourkephotography.ie

Only six players broke par over the two days. Sean O’Donoghue of Mount Wolseley was one of these shooting two one under pars 69 when tying for third place with Kilpatrick.

Mooney had words of praise for the Carlow track.

“The course is lovely. It is a proper old-style golf course. There are so many tough holes. Seven is a tough test-it could be a card wrecker.  The par 3s are very nice and they vary a bit.

It is tree-lined, the rough is in the right place and it is a very fair test,” he said.

As for the Open Series which is in its inaugural year, Mooney is happy to be the first winner in the Irish region but says it has to be a must on the golf calendar.

“It is a good idea. It has given us a tournament where only professionals play. 95% of what we play is pro-ams. It is the way we raise the money so a pro-am is hosted and people pay. We end up playing for a fund. If we can get a good sponsor then it is driven by money,” he noted. 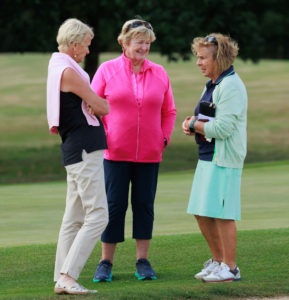 John Fitzpatrick, the  Golf captain of the Carlow Men’s club says the course was an excellent test of golf,” he said.

“I think,  with only six scores under par, this reflects the challenge which is Carlow Golf Club.

Conor Dillon, Manager of  the PGA was also warm in his praise of the host club.

“It was very important for us to bring this event as it is a brand new event. For us, it was very important for us to have the right venue. Having the Midland Open in Carlow,  it was a very good test of golf. The golf course lends itself to some very good scores and also, it is recognition of giving something back to Damien McGrane. We are very proud to have Damien as a member and he is a fantastic ambassador for the PGA,” he said.

Damien McGrane, the Carlow professional himself said the course played tough but fairly. 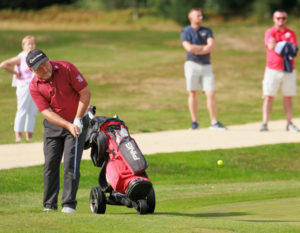 Damien McGrane chips to the green during the PGA (UK and Ireland) Open Series at Carlow Golf Club. Photo: michaelorourkephotography.ie

“The players enjoyed the test. Tony Pender (Head Greenkeeper) had the golf course in great condition. Firm, fast greens and the course really displayed the teeth that it has. I also played nicely to shoot level par total in front of so many members who came and supported us. The members turned up in force today and watched a good finish.”