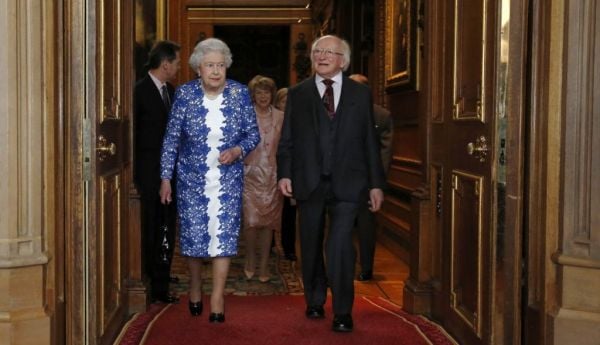 President Michael D Higgins has praised Queen Elizabeth’s “exceptional” ability to combine a sense of formality with “a great capacity for connection with the people”.

It comes as leaders across the political, business and cultural spheres on the island of Ireland continue to express their sympathies and condolences to the late British monarch, who died on Thursday at the age of 96.

Political leaders noted how the queen’s historic 2011 visit to Ireland, the first by a British monarch since Irish independence, set a new tone for Anglo-Irish relations in the following years.

“There was that capacity to bridge the formal and the informal,” Mr Higgins said on RTÉ’s Morning Ireland programme.

He said that the preparations for the 2011 visit to Ireland were “complex” and required “some subtlety and very good diplomacy”.

“To be able to cover all these different areas of human interaction and humanity, that’s a very, very significant achievement.”

Mr Higgins said that during his visit to Windsor Castle in 2014, the first State visit to the UK by an Irish President, the queen was insistent that progress made in relation to Anglo-Irish ties “must be kept going”.

Elizabeth II was Britain’s longest-reigning monarch, serving as head of state for more than 70 years.

Her son the Prince of Wales is now King Charles III, having acceded to the throne immediately on the death of his mother.

Mr Higgins said of his ascension to the throne: “Charles, who I’ve had many meetings with and many, many conversations, and was very interested in keeping these special relationships between our people going, I want to wish him every success.”

Following her death, the king said that during the period of royal mourning, set to last from now until seven days after the funeral of the late queen, “my family and I will be comforted and sustained by our knowledge of the respect and deep affection in which the Queen was so widely held”.

The Lord Mayor of Dublin, Caroline Conroy has opened an online Book of Condolence for the citizens of Dublin to extend their sympathies on the death of Queen Elizabeth II.

Lord Mayor Caroline Conroy said, “On behalf of the people of Dublin, I would like to extend my sympathies to the British Royal family and the British people on the passing of Queen Elizabeth to whom she gave such loyal service for many decades. Her dedication to duty and public service were undeniable and her knowledge, understanding and experience truly unique. Ar dheis Dé go raibh a hanam.”

The Book of Condolence is available to sign at https://bit.ly/3B60MD6