Ronan, playing at tight-head produced a stunning performance both in the loose and in the set-piece as Leinster got a grip of the game in the second half after a tight opening period.

Playing at out-half, Burgess scored a try before the interval to help Leinster into a 13-8 lead and with the number 10 dictating matters in the second period the home side gradually wore down the  Northerners to come away with the victory.

Burgess had played in a warm-up game in England in the lead-up to the interpros but didn’t start against Munster and Connacht. He did come off the bench against the Westerners so was hoping to get the nod in the final game. He admitted he was on edge in the hours leading up to kick-off.

“It was my first start. I was nervous but I concentrated. We were very anxious to win the interpros,” he admitted. 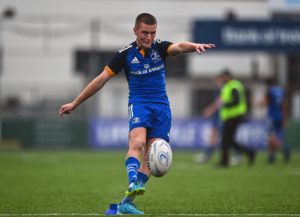 Peter Burgess of Tullow RFC kicks a conversion during the U18 Clubs Age-Grade Interprovincial Series match between Leinster and Ulster at Energia Park in Dublin. Photo: Ben McShane/Sportsfile

On the day,  Burgess scored one try, a penalty and three conversions. All the  preparation over the summer including  attending  training sessions three times  a week in Dublin seemed so much worthwhile on Saturday.  Before the game, all the players had been told to go out, express themselves and enjoy the day.

“I was delighted after the game. It was a great experience. Ten weeks of the summer were taken up  were preparing for these matches. I am looking forward to playing with Tullow and being successful with them,” the Leinster out-half confided.

Tadgh Ronan had come off the bench in a 36-15 win against Munster  earlier in the series. Now he was told he would be starting. He embraced the challenge and received  encouragement along the way.

“It was very enjoyable. I had a point to make and the coach told me to go out and show I deserved to start,” said Tadgh.

It was  a positive experience for the Carlow tight-head.

“I felt I had played well and was comfortable around the pitch,” he said stating that he was able to absorb the atmosphere and the feeling of representing his province.

“It was definitely enjoyment. It was a close game and we had to go to the end,” he recalled. 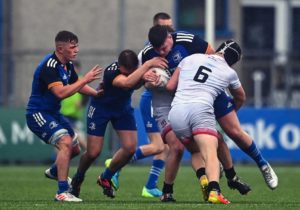 Tadgh Ronan of Carlow RFC is tackled by Billy Allen of Ulster during the U18 Clubs Age-Grade Interprovincial Series match between Leinster and Ulster at Energia Park in Dublin
Photo: Ben McShane/Sportsfile

“We started our preparation in June. We had a team bonding session in Gorey in July and travelled to Dublin three times a week after that,” said Tadgh.

After an amazing summer, both players are back with their clubs now and are looking forward to the start of the South East League games.