What the papers say: The press reacts to the death of Queen Elizabeth 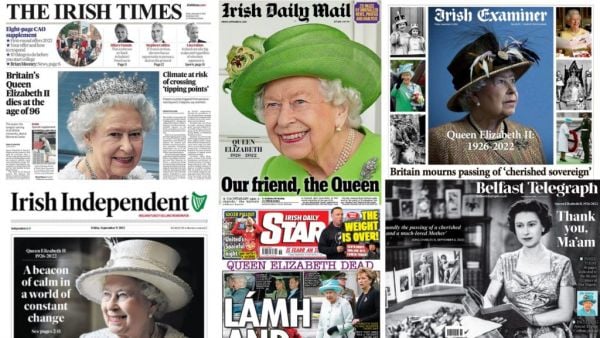 The death of Britain’s Queen Elizabeth has sparked tributes and special supplements from the leading newspapers.

Buckingham Palace announced the death of the 96-year-old monarch, who died “peacefully” on Thursday afternoon at Balmoral in Scotland.

Here is how the Irish and British newspapers reacted: 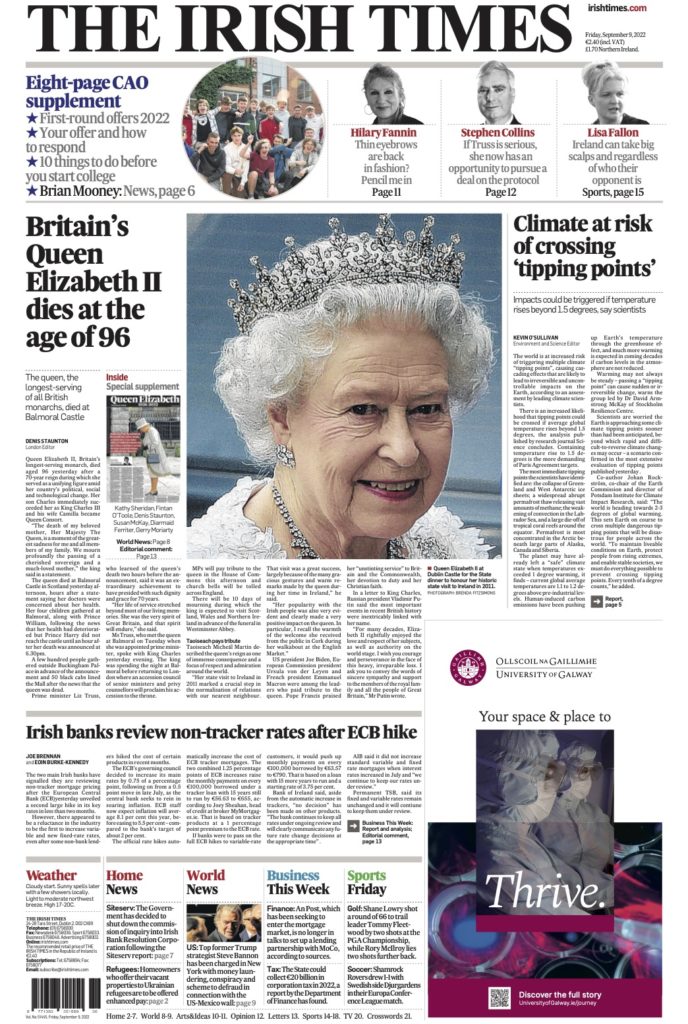 The Irish Times pays tribute to Queen Elizabeth with a special supplement featuring its leading writers and commentators. 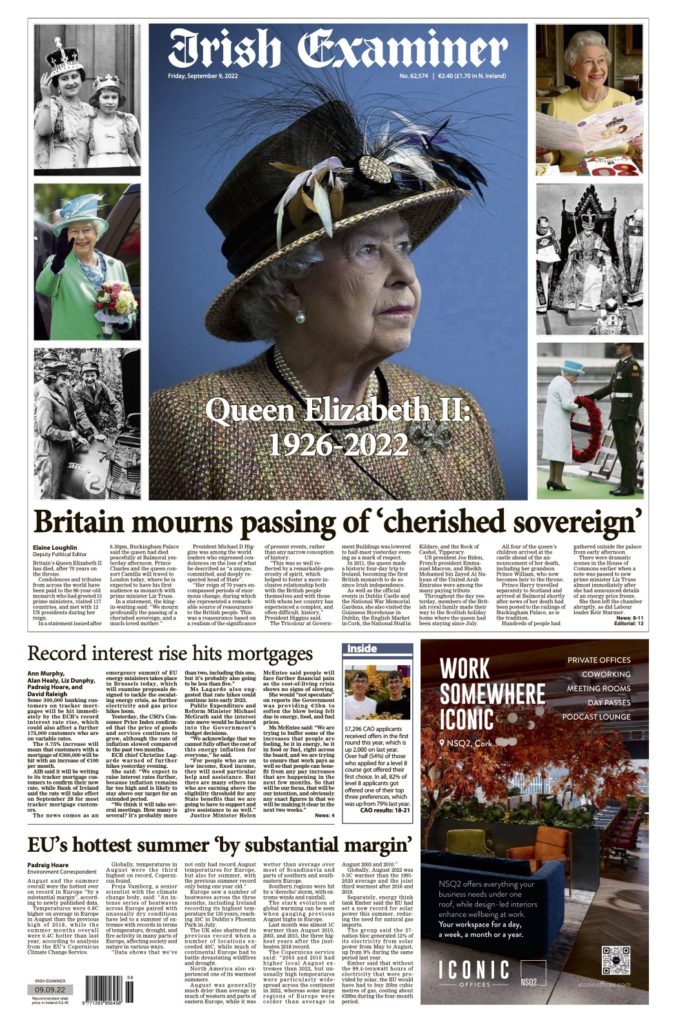 The Irish Examiner places a series of photos of the late British monarch on its front page.

The Irish Independent remembers the queen as a “beacon of calm in a world of constant change”. 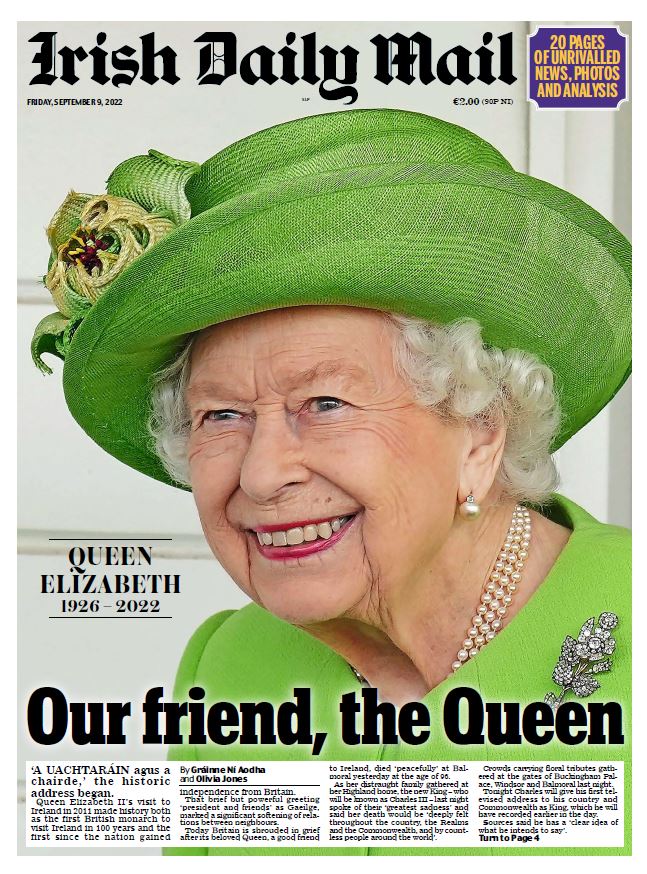 The queen dressed in vivid green features on the front page of the Irish Daily Mail, which calls the British monarch “our friend”. 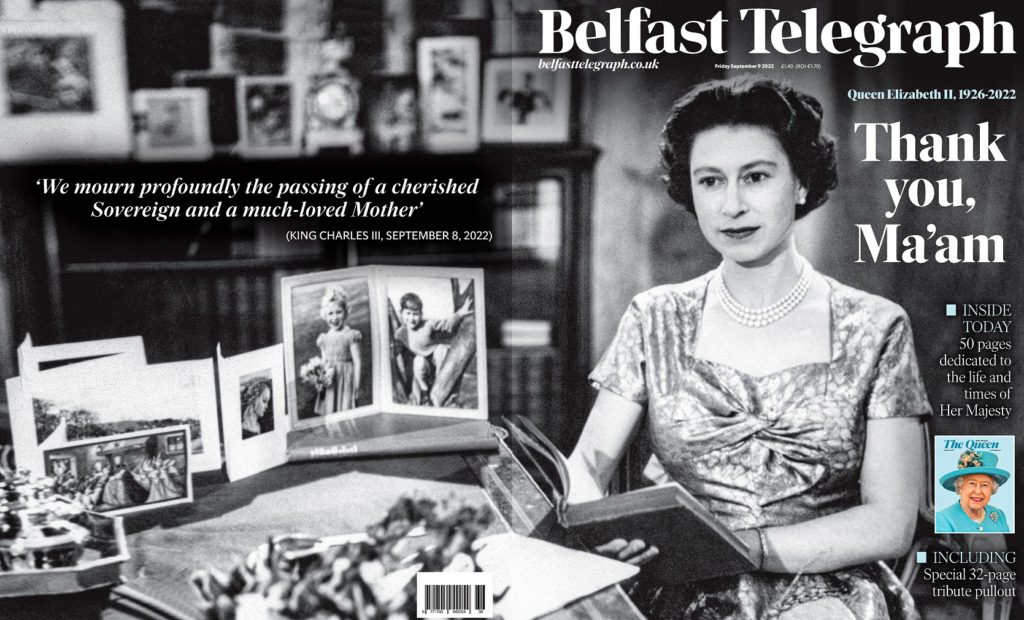 The Belfast Telegraph’s tribute to the queen runs across the front and back pages of the paper, and includes a special 32-page tribute pullout. 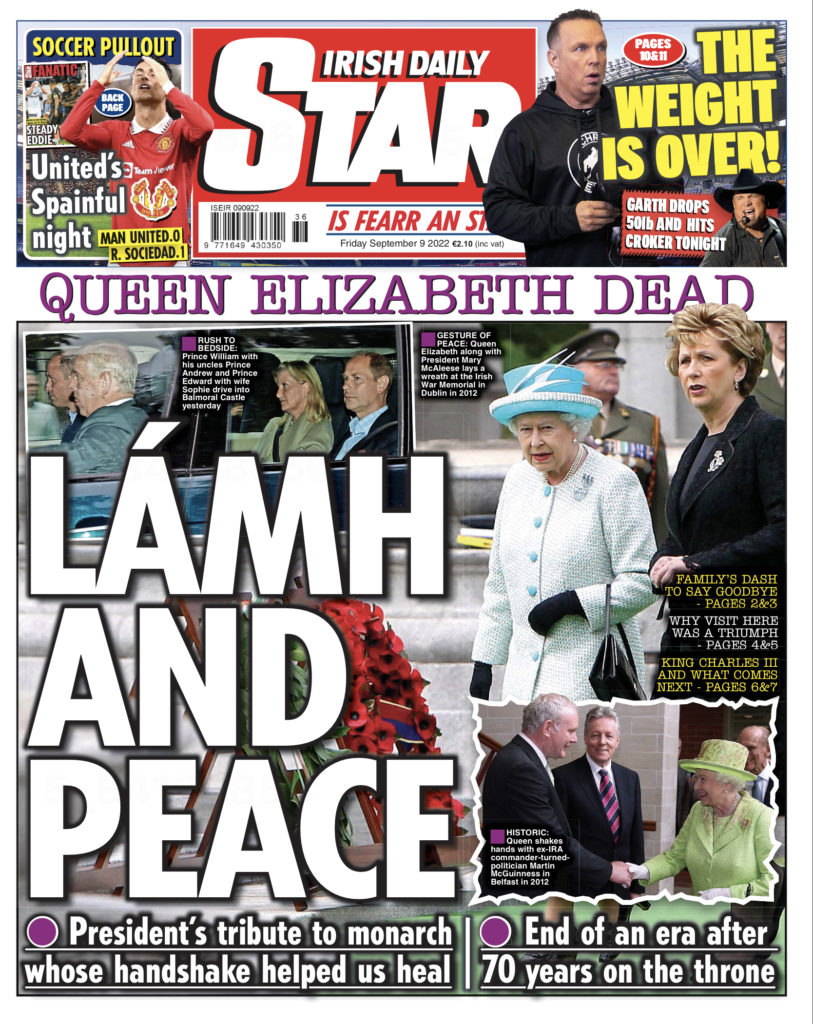 The Irish Daily Star highlights the queen’s impact in Ireland, including the handshake with Martin McGuinness that “helped us heal”.

A Life in Service

The Times carries a striking image of the queen at her coronation on June 2nd, 1953 – a picture which several papers have used as the background to their tributes.

In its obituary, The Times described the queen as “the woman who saved the monarchy” in Britain.

It continues: “That is not to say that without her we would have had a republic by now, or that the monarchy did not endure some troubled times during her reign when the unpopularity of some of its members led critics to question its very future, but it is thanks to her dedication and seriousness of purpose that an institution that has at times seemed outdated and out of keeping with the values of contemporary society still has a relevance and popularity today.”

The Guardian opts to let the queen’s coronation image stand alone, bar some simple text on the left-hand side which reads: “Queen Elizabeth II 1926 – 2022”.

Inside the paper, columnist Jonathan Freedland writes her death heralds not just the end of the Elizabethan age, but the start of “a new future”.

“There will be a different head on the coin, different words for the national anthem,” he said.

“The one element in our collective life that was consistently, reliably the same… has gone.”

The Independent also lets the queen’s coronation image speak for itself, though an editorial carries the queen’s own words from her tribute to Diana, Princess of Wales: “[We now have] a chance to show to the whole world the British nation united in grief and respect.

“Thank God for someone who made many, many people happy.”

Metro takes a similar vein, but dedicates its front page to a portrait from her younger years.

The tribute continues inside, with the leading article on her death running under the headline: “The Rock of our Nation.”

On tomorrow’s front page: ‘We loved you, Ma’am’ https://t.co/0omqhOXoZY pic.twitter.com/4RQIFr19tm

The Sun‘s tribute to the queen runs across both front and back pages, with a statement from Charles – who automatically became King upon her death – running on the back.

On the front, the paper says: “We loved you Ma’am.

“Rest in peace… The Sun and our readers loved you. We are proud you were our Queen.”

‘Grief is the price we pay for love’ – HM Queen Elizabeth IIhttps://t.co/GvXEEFpNkR pic.twitter.com/QdFt2H9pHe

The Daily Telegraph strips the colour from its front, juxtaposing a picture of the queen in her later years with the poignant message she gave to New York after the September 11th attacks: “Grief is the price we pay for love.”

In an editorial, the paper paid tribute to the monarch’s “lifetime of service”, adding: “She was more than just a distant, matriarchal symbol of nationhood; she was our constant companion and guide, reassuringly composed even in the most turbulent of times.”

Also in black and white, the Daily Express says simply: “Our beloved Queen is dead.”

He continued: “At the news of her loss, a wave of sorrow has swept across not just her beloved kingdom but also the whole world.

“In the hours since her death, the poignant respect in which she was held has been graphically revealed in the flood of tributes from political and religious leaders all over the world, but just as important has been the deluge of cards and flowers from ordinary people who loved her and struggle to imagine Britain without her.”

The Daily Mail mourns the queen’s death with the headline: “Our hearts are broken.”

Sarah Vine, a columnist for the paper, writes: “How to find the words?

“Our grief is a hundred different emotions, all of them hard to grasp.”

“Thank you”, is the message on the front of the Daily Mirror, which in an editorial calls the queen “one of the most remarkable ever to grace the pages of our history”.

It continues: “For all the trials and tribulations we have lived through since she ascended the throne – the hardships, the wars, the downturns and the disappointments – we should always be thankful that we were witnesses to not just the country’s longest-serving monarch, but also one of its greatest.”

The Financial Times carries tributes to the queen from at home and abroad, including British prime minister Liz Truss and US president Joe Biden.

Below an image of the monarch attending the state opening of Parliament in 1971, the paper calls her death a “watershed moment in the life of the nation”.

Friday’s special edition marks the death of Queen Elizabeth II at the age of 96. pic.twitter.com/XbFCKuJWRn

The i reports on what comes next, with the queen’s son and successor King Charles III set to address the nation as the country enters 10 days of mourning.

Inside, the paper says “more than half a million” Britons are expected to visit the Queen’s coffin as it lies in state at Westminster Hall before a state funeral is held at Westminster Abbey.

And the Daily Star pays tribute with a direct message to the departed monarch, saying “You did your duty Ma’am”.

An editorial from the paper adds: “The Queen’s death leaves a huge hole in the nation’s heart.

“She brought unparalleled grace and dignity to the role.

“There were times when she had to deal with scandal and tragedy. But she always bounced back and was clearly made of the strongest stuff.

“Put simply: Her Maj made us all proud to be British.”